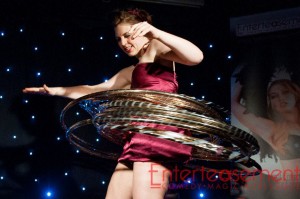 Howdy, this is more of a reflection on the weekends events rather than a show review.  One of the things that really sells our intimate venue is the personal touch.  so I thought I’d just share  my thoughts on the weekend.

So this show was billed as ‘The Super Show’ and when I woke up this morning there was one word in my mind:  Perfect.  I don’t know why this word was there but as I thought about both shows and spoke about certain aspects of the show it was a word I continually used but not for the reasons you might think.

Perfect:  When something cannot be improved upon it is said to be perfect.

Enterteasement will never be perfect; but, every month we try and do something slightly better than the previous month.  Whether that’s a better venue, acts, staff, equipment, prizes etc we’re always looking for that extra 1%.

Was this weekend perfect?

Unfortunately not.  Don’t get me wrong it was an excellent weekend, we’ve had rave reviews, people asking when the next show will be and many of our regulars saying it’s one of their best ever shows.   However,  we’re only at about 80% of where I think we can be and we’re working towards it.

Things we got right

As predicted, the Saturday show sold out 2 days before the doors opened.   When you consider there’s venues  & companies out there struggling to fill rooms half our size of ours it’s an amazing achievement that we can continually pack the room and sell out before the doors open.

The show ran perfectly on schedule on  Saturday.   We’re normally a few minutes behind schedule but ever break and act started and finished on the exact minute it was mean to.

Charity:  We raised £165 for Bwindi Community General Hospital in Africa.   Also, this was not a case of ‘donating money’.  The money was raised by my mum who has been making new scented bath products (bath bombs, scrubs, body butter) so everyone left with something for their money.   It’s also great to see my mammy doing something she loves and she’s constantly improving tweaking her designs / ingredients etc to make them even better.   Hopefully she can change this from a hobby into a profession.

I forgot to bring my magic props on the Saturday so had to improvise my set.

We accidentally turned all the power off on the Sunday, nobody noticed and just thought it was part of the show

Drinks spillages:  On the Saturday we had more drinks spills than ever.  When people knock over a drink they never tell us they just sit in a pint of beer.   Nobody knows why.

I had spoken to 2 different ladies on the phone regarding reserving seats and assumed it was the same person so we made a mistake there. 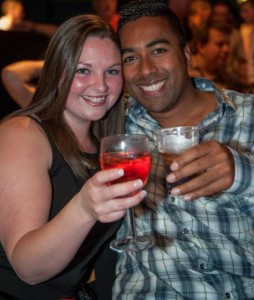 This is why the word perfect kept coming into my mind.  Among all the good things and bad things there were some perfect moments
Kelly:  I’ve known Kelly since before Enterteasement began.  For the first 2 years she couldn’t make it to the shows as she always had the kids and lives over an hour away.  But she finally made it to a show, she loved it and she’s become a regular ever since.  Not only does she come to the shows, she sits down the front, she screams for the burlesque, laughs at the comedians and posts nice things on the page.  We have a few people like Kelly but this month she graduted as well (clever cookie) So my mum decided to make her a special present and have it specially wrapped.

When Kelly Saw the specially wrapped pink box she said to the guy she was with, “I hope I win that in the raffle”  Not knowing she had already won it simply for being a genuinely lovely person.  She sent me a photo of her kids faces as they were all excited to try out the bath bombs.

Sukki Singapora:  In today’s society we tend to promote beauty models over role models.  Sukki is one of the few people who could do both.  Her skin is so clean she actually looks photoshopped.  If I was to describe her performance I would say it was perfect.  Before the shows, she shares our event, she turns up early and is a joy to work with back stage.  Her manners & conduct are impeccable truly one of those people who does everything right.  However, although she’s performed all over the world and is a global star in burlesque she’s one of the most humble, down to earth people you could meet.  When she’s not being amazing on stage or getting up early in the morning to go to the gym she’s doing charity work.

Jaggy Pickles:  Mike and Linda come to Enterteasement every month.  I get to speak to Mike for a couple of minutes every night; but it was only on Saturday that I discovered this is their one night out a month and every month for the past 2 years they have spent that night with us.  Mike is quite happy to offer us the money to take the back booth for the next 6 months.

Early Burd and Photo Bomber:  Again, they’ve been coming every month for the last 2 years but what I’ve only started noticing is that they go around my staff and offer them a drink before the show! How perfect is that.  We’ve always wanted to give people that personal experience but I never expected that we’d be receiving the personal experience from our guests.

Christopher Beattie:  A guy I went to school with had the perfect excuse for not bringing his wife to the show – she’s expecting their first child – very, very happy for you bud – that’s one lucky child 🙂

Yum Yum:  Last month one of our old regulars never got into the Admiral because her sister had forgotten her ID.  As they were already out in town they went to another bar and she got chatted up by another guy and on Sunday they had their 1 month date at Enterteasement.

Rebooking:   The Saturday show finished at 10:30. At 11pm we had someone book tickets to the Sunday show who had just attended the Saturday show.  That’s right, knowing how good a night it was he decided to come back the next day and watch the same show again. 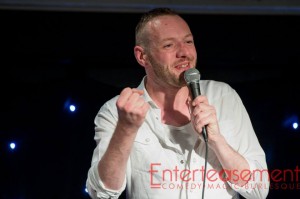 Consistently strong both nights:  Scott’s got one of those lovable styles that even when he’s picking on someone in the audience you know it’s just a bit of fun.  He poked fun at The English, flirted with the guys and had a great time on stage.

A great performance from one of Scotland’s best compere’s 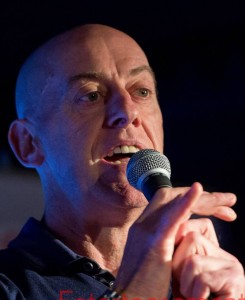 Was excellent on the first night.  As we start an hour earlier than most comedy clubs the opening spot is never an easy one and many comedians really struggle.  Gary did his strong tried and tested material on the Satuday night and blew the roof off the place.  Gary is one of the few people who can do this.

On the Sunday he did a mixture of his strong material and newer stuff.  It was good to see Gary out of his comfort zone trying some new material, unfortunately as I’d introduced my mum as being there raising money for charity his anti-charity material didn’t do as well as it could have.

Still – good to have Scotland’s top headliner on our Bill, we’ll need to get him back in 2015 in his proper role as headliner. 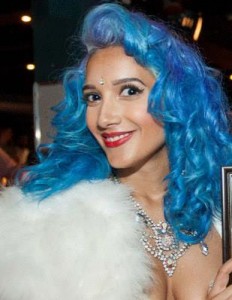 Simply perfect!  A true world class performer who is a joy to work with on and off stage.  Her acts were exceptionally well received with many avid burlesque fans saying “She’s in a different league”.  Sukki’s performances are classy, elegant, fun and performed excellently.

Both her acts has Asian elements to them with the first having some rice poured over her (I’m sure this is normally champagne and the next having oriental looking fans.  Both acts were excellent.  We hope she comes back again. 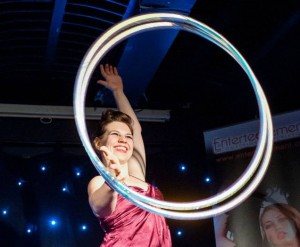 takatto will never be perfect and I don’t think she’d have it any other way.  She’s constantly pushing herself to learn new tricks and push her boundaries with more complex routines.  Her improvement with the hoop in the last 3 years is simply outstanding.

Her latest routine had her standing on one leg and still managing to perform with 4 hoops!  She’s also added a little bit more of a burlesque element with music choice, dress etc so it fitted in really nicely with our night 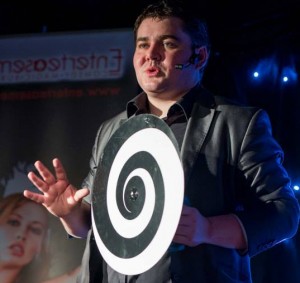 How do you review yourself?  On Saturday I managed to scrape by with 4 things that just so happened to be in my car.  I had no intention of performing these tricks but I performed them and nobody noticed I was winging it so all good.  Sunday I felt far more comfortable with my own act.

However, I never perform to my best at Enterteasement because I’m always stressed out.  It’s something I look to improve upon in 2015.

Back when I had a “real job”, working in IT, we used to listen to Des do his phone call wind-ups 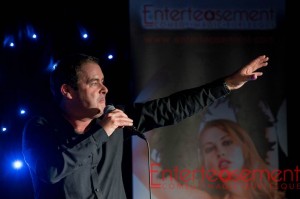 with my particular favourite being the Glasgow Ned Character of Plunge McNugget and the fast talking old woman Ina.  Des Incorporates many  voices into his set with stories of Tommy Sheridan days and a focus on tanning.  Des isn’t like other comedians, he kinda goes in and out of his set using voices and characters wrapped up with a high energy performance.

It was Des’ first time performing for us and at The Admiral for someone who has travelled the world, sold out 1000+ seated venues etc to walk into The Admiral and immediately say “This is a comedy club!”  Is always nice to hear.  Comedy is performed in many venues but The Admiral has a Stage, lights, is a nice size etc.

We’re having one more Sunday show in November. Unless it sells out I’m afraid we’ll have to pull the plug.  The Admiral doesn’t normally open on a Sunday so having to bring in 3 staff and a partner isn’t providing enough bar sales to justify opening.   We’re also not making any money off the Sunday show and need about another 30 paying customers to make it all worth while.
If it sells out, we’ll continue, if it doesn’t we might look for a smaller venue that’s already open so if you guys want it, please get behind it.

The main star of the show on both nights was the audience.  No shouting, heckling etc just loads of big laughs, screams and claps.  I must admit, I’m spoiled with how good they are but after ever show comedians come up to me and say “What an amazing audience”  So for all your guys who come along thank you.

Because of our excellent audiences, the acts all love performing with us and tell other acts that we’re a good gig we’ve been able to attract other big named acts and bring back our regular acts who like working with us.

Jackie – my girlfriend for helping out selling the bath goodies

My mum for making the raffle prizes

My hard working team who make the show run smoothly.

Stakatto for inspiring me to get off my lazy ass and start learning new magic and to start pushing myself again.  New act coming soon!