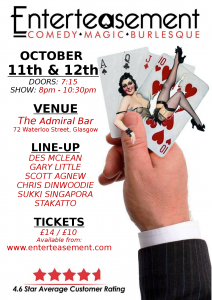 Do you want to try something new and exciting and really celebrate your weekend? Then try:
Enterteasement’s: COMEDY MAGIC BURLESQUE LIVE SHOW!!
Enterteasement’s monthly shows have a 4.7 star average customer review and a reputation for selling out. However, this month’s line-up is SO STRONG that it would be unfair to allow just 120 people to see it so we’re running on The Saturday & Sunday (Saturday Show Now Sold Out) . Every performer in this bill has WON AWARDS, received 5 STAR REVIEWS & BEEN ON TV!

Where Can I see this show?

3 Minutes walk from Central Station at The Admiral.   What’s that you say?  The Admiral?  Yip, downstairs is one of the best kept secrets in Glasgow.  It was nominated for Best Comedy Venue In Scotland in 2014 and Billy Connolly has gigged there.  So if it’s good enough for him….

Des McLean is a multi-award winning stand-up comedian, TV & Radio presenter. Having Sold out The Pavillion and played Carnegie Hall in New York Des has established himself among the comedy greats!

Gary was voted: “Best Headline Comedian in Scotland” By his peers in 2014 and has sold out not 1, but, 4 Glasgow Comedy Festival shows in the same year.

Scottish Comedian of the year 2008, Scott is an improvisational genius and one of the most popular compere’s in the Scotland and the UK!

One of the funniest magicians in Scotland, 5 x Scottish Close-up Magic Champion and Scottish Comedian Of The Year Semi-Finalist.

Highly regarded as one of the most phenomenal Burlesque Artists of our time. Sukki is on tour of the UK and we’re delighted to have her. She’s been Crowned “One Of The Most Beautiful Women In Burlesque” and is the first burlesque dancer to received a Royal Invitation to Buckingham Palace.

Mind-blowing hula-hoop routines that leave the audience with that feeling of “WOW!”. Stakatto is an award winning hula hoop performer with excellent crowd pleasing routines. An Enterteasement Favourite!