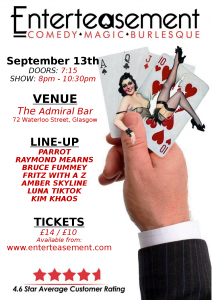 Enterteasement is Glasgow’s Favourite Comedy Magic Burlesque night. Proudly boasting a 4.7 star average customer review and a reputation for selling out shows. The September 13th show has an International cast of As Seen On TV Acts and Award Winners. This is not a show to be missed – Get your tickets while you still can – this will sell out!

Founder member of STV’s The Funny Farm, Parrot has not only been headlined all over the UK and appeared on programs like The Jonathan Ross Show, he has also written for Jack Dee and Jo Brand.

The finest comedian on the Afro-Celtic comedy circuit, Bruce has headlined for us on several occasions and his mix of original material and audience interaction is always hilarious

5 star Reviews from the Edinburgh & Melbourne Magic Festivals – our Dutch magician Fritz has been described as “Amazing” by Jermaine Jackson and has appeared on TV in USA, HOLLAND & Australia

Finalist for the U.K.’s ‘Alternative Model of the Year’ 2014, From USA, She studied at The New York School Of Burlesque and presents well choreographed routines fusing several styles to create powerful routines.

Amber is a tribal fusion dancer from London. She’s been performing her unique belly dancing style at Sell Out cabaret shows all over the UK.

“The animal of Scottish burlesque”. With stunning big eyes & lips Kim mixes classic tease with a hint of modern madness!