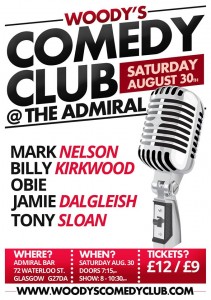 Enterteasement’s NEW Comedy Only shows might be missing the burlesque and magic; but what we lack in boobies we certainly make up for in the comedy This line-up consists of As Seen On TV Comedians, 2 Scottish Comedians Of The Year and some of the most promising talent in Scotland

Our resident compere Billy will be injecting his playful, energetic. style that saw him awarded the title of: ‘Scottish Compere Of The Year 2014.

Scottish Comedian Of The Year 2011, Jamie is a master story teller who finds himself in awkward situations that could only happen in Glasgow. Pub humour at it’s very best.

Original, Surreal, Hilarious – Obie’s been warming the hearts of audiences all over the world for the last 12+ years. His off the wall, unpredictable style will leave you wanting more.

Burst onto the scene in 2014 Tony is an exceptionally talented new comedian with the potential to be the next big thing in Scottish comedy.