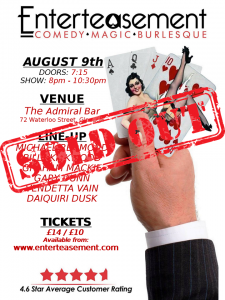 WHAT A SHOW – The comedians were hilarious, the burlesque dancers were amazing, a chicken moon-walked and people ate marshmallows. The acts were great, our staff were great, the audience were fantastic -(only 2 spilled drinks the whole night) What’s even more amazing is that a quick nosey around Facebook revealed the rest of Glasgow’s comedy audiences were rude, heckled, talked through the acts etc…we  had people helping out bringing drinks back to the bar and turning the fans on and off for us!

So I was a bit concerned that we might be empty but in the last week the tickets started flying out and we sold out on Thursday, 2 days before the show.  I had every faith this show would sell though as it’s a very strong line-up with lots of our favorite acts. 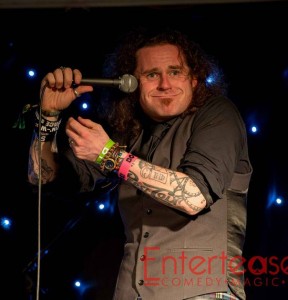 Take a genuinely nice, funny guy, throw in some Red Bull and a mild case of ADHD (the condition, not the Rock Band) and you’ve got Billy Kirkwood. Billy just done a gig in Inverness then drove 3 hours straight to Enterteasement.

Before the gig started, a phenomenon occurred, people raced for the seats at the front. People are normally scared to sit at the front of a comedy show in case they get picked on – with Billy, you want to be in the front because he leaves you with that feeling that he’s everyone’s best friend. Billy done all his funnies and even played a game of Cuddily Bunny (Fluffy Bunny for anyone outside Ayrshire) where our resident front rower Derek was defeated by Enterteasement newcomer Tracy (I think that was her name)

Yet another Word class performance from a man truly at the top of his game right now. 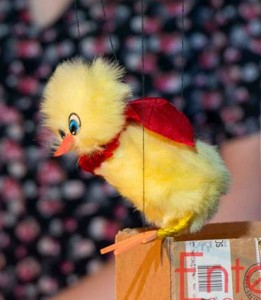 Gary’s always goes down well with our audience…and let’s be honest , if you’ve got a moonwalking chicken you’re acts pretty much going to be safe no matter where you go. ‘Colin The Chicken’ dances, did stunts and eventually found a spectators chosen car. There’s a point in the act where you find yourself completely forgetting it’s attached to wires and 2 bits of wood and you realise you’re laughing, screaming and showing genuine concern for a puppet.

Then he made a human puppet from a spectator. The spectator was excellent and he played along to the songs and dances. The whole act was held together with joke after joke and got us off to the perfect start. 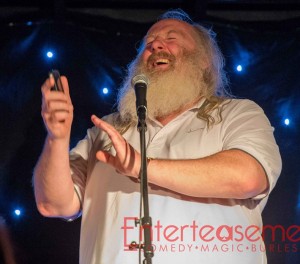 Mackie’s been in the comedy industry for a long time and even when he’s slagging off Billy Connelly and telling horrible jokes about his daughter he still looks like a big cuddly Santa. Graham told one of my favourite jokes of his about the Shawshank Redemption happening in Greenock Prison. The highlight for him had to be when he got heckled. Graham does a lot of compering and is a match for anyone throwing an insult his way but on this night a comment from the audience flew under his radar and took him by surprise. He was telling a story about going to a make-up counter to get some foundation for his daughter, an audience member (Gemma) said “Uh Oh”. Nobody else heard this but it gave Santa a short fit of the giggles. Hopefully she’ll stay off his naughty list at Christmas and not end up down his celler (You had to be there) 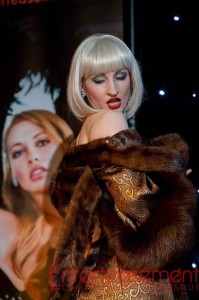 Vendetta was the first real top professional that we hired and since then she’s always been one of our favorite acts. She’s moved to London now so we don’t a chance to see her often; but, when she’s available we’re always the first one to snap her up. She did her Russian dance for us which has really unusual music that encourages the audience to clap along to. This ends with a fan dance and the trademark Vendetta pose. Most girls, do a quick pose then run off stage but Vendetta poses for a perfect picture and well deserved round of applause.

Her second act was a balloon pop act to the track Rhinestone Cowboy. In complete contrast to her powerful first act this one was more about fun. Every time a balloon popped more of Vendetta was revealed all followed by another fantastic pose. Great acts – thanks Vendetta – hope to see you again soon. 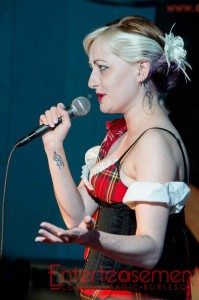 Daiquiri has been flying the flag for Scottish Burlesque for the last 7 years. In the last few years she’s done great things and now is not only a burlesque performer but a burlesque teacher, writer and maker of nipple tassels – don’t you just hate these multi-talented people!?

One of her many claims to fame is a Britain’s Got Talent performance where she received a standing ovation from Amanda Holden. So if it’s good enough for Amanda, it’s good enough for us. Her, Bonnie Lass act that starts with a cheeky Scottish poem then finishes with a Highland dance burlesque act.

Michael is an Irish comedy legend, I don’t know if he ever had his marbles but he’s 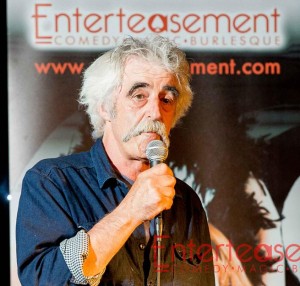 definitely lost a few over the years and the madness just adds to the comedy. Who could get 5 minutes of comedy out of eyebrows? However, one of the best laughs of Michael’s set was a heckle. He was doing his set and was talking about how small jockeys are and someone shouted:

Surprisingly as well he also done a bit in his set where he asked the audience who he looked like. In my 14 years attending comedy clubs and watching it on TV I’ve only ever heard 2 comedians do a “Who do I look like?” segment. Maybe the audience had a “he looks like a…” feel to them. Great set and a wonderful applause & screams at the end.

Our team, yet again, were fantastic! For this first time ever, I don’t think I was stressed on a night and I think this is only the second time we’ve had Cupcake, Star and Lindsey working together. It’s great having people who are great at what they do who genuinely care about what they do.

Charity: You guys Raised £75 for charity via Bathbombs, Minions and raffle. Most of this will go to Bwindi hospital and some will go to a local donation.

Audience: It’s not quantity…it’s quality, but when you have quality and quality – you’ve cracked it.

SADLY: Kev from the Admiral is leaving for pastures new. He’s been great for us, discovered a way of setting up the chairs with the canter passage & has helped out with the sound.

Enterteasement: September 13th with yet another great line-up including 2 acts we’ve never seen before. One of Holland’s top magicians & one of the founding members of The Funny Farm.  Tickets go on sale soon.