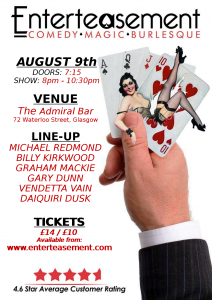 Enterteasement’s Comedy Magic Burlesque show on Saturday August 9th show is a showcase of our favourite all time performers. Over the last 3 years we’ve established a 4.7 average customer rating and a reputation for selling out quick. We’ve managed this by creating a friendly environment and some of the best performers from around the World. On August 9th we’re delighted to put on a frighteningly strong bill of As Seen On TV Comedians, Award Winning Magicians and International Burlesque acts. Go on celebrate your weekend and try something different.

Winner of ‘Best Scottish Compere 2014’ at the Scottish Comedy Awards. Billy’s done everything in Comedy from hosting at the most prestigious comedy clubs; music festivals & ICW wrestling matches. However, we feel his high energetic, playful, friendly style makes him perfectly suited to Enterteasement.

2 x Finalist in Scottish Comedian Of The Year and guest Star in the BBC’s The Limmy Show Christmas Special. Graham Mackie looks like Santa and his delivery of stories from his teaching days and family will make you think Christmas has come early.

Gary is a Professional magician from Newcastle who mixes Magic, Comedy and if you’re lucky a mind-reading chicken! A previous Enterteasement ‘Act Of The Night’ winner, Gary’s act will leave you amused & amazed.

Described by ‘The Scotsman’ as “Somewhere between a crack addict and a blow-up doll” Her unique style & amazing stage presence have established her as one of the top burlesque acts in the UK if not the World. She’s an International Performer, World Burlesque Games star and is simply unmissable!

4 Yeses from Britain’s Got Talent and a Standing Ovation from Amanda Holden. Since Then Daiquiri has become an International Burlesque Sensation recently becoming a Finalist at the prestigious Milan Burlesque Awards & has just returned from The World Burlesque Games.