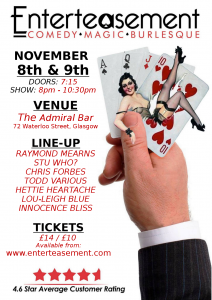 Looking to celebrate the weekend and try something different?  Then checkout Enterteasement’s, November 8th & 9th, Comedy Magic Burlesque show.  This month’s show is incredibly strong with 3 As Seen On TV Comedians,  a professional magician & 2 International burlesque artists.  All this right in the heart of Glasgow in one of the city center’s most intimate venues.  Our shows proudly boast a 4.7 star average customer rating and a reputation for selling out – read the line-up and you’ll see why!

To get your tickets for the Sunday Show for £10 click the blue button.

One of Scotland’s all time funniest comedians.  Raymond headlines all over the UK and has several TV appearances.  He has been been described as “A Genuine Improvisational Genius” by Frankie Boyle.

Comedian and Actor Chris Forbes is the co-creator and star of BBC 2’s ‘How Do I Get Up There and ‘Scot Squad’.   Not only that, Chris has supported Kevin Bridges on tour and received 4 and 5 Star reviews for his Glasgow & Edinburgh Festival shows.

Our international master magician this month comes from Detroit in USA.  Todd’s mixture of comedy with expert sleight of hand magic saw him perform at The World Championships of Street Magic.

Channelling the allure of the 30s-50s Hollywood starlets  Hettie is a London Burlesque Festival performer  specialising in classic burlesque.  We’re delighted and saddened to announce Hettie’s presence on our bill.  In June Hettie made her debut for us; but, this will be her last performance as she’s retiring in December.

All the way from Bristol we’re bringing back one of our most talked about performers of the year.  Her alternative and unique style shines through in all her acts captivating the audience by breaking down the traditional taboos of burlesque but taking the best bits along with her for the ride.

Innocence Bliss will be performing her first ever show in front of a live audience with us.  After signing up for some burlesque lessons with The Showgirl Sessions, Innocence applied for the opportunity to perform in a live show.  After months of training, with highly respected burlesque trainer Ash McTease, she was  hand-picked perform for us.