At the start of 2014 we were selling out weeks before our doors opened and I was inundated with requests for tickets to see the show so we decided to launch a Sunday show .   If you couldn’t have your first choice of a Saturday night, a second choice for a Sunday show would be a good idea – right?  Wrong!  No one wants their second choice – including me.   So this show was really strange for us because we had 4 separate phone calls from potential customers saying they’d tried to book tickets elsewhere, but they’d all sold out so we were their second choice!  Luckily we were their second choice because they’d never been to one of our shows and thankfully one group celebrated their birthday with us and afterwards said they were glad the other venue had sold out because they had a better night with us,  so that makes me happy and my ego is recovering well 🙂

Due to some incompetence on my behalf, the show was launched 13 days before the doors opened.  The Saturday show completely sold out before the doors opened  and the Sunday show attracted a decent audience but it’s just not financially viable so we’ll be knocking the Sunday show in the head until further notice.  I would just like to say to everyone who attended out Sunday shows – Thank you.  What a well behaved, fun, lively audience you guys were  I don’t know if it was just because it was quieter but we found you guys really friendly and my team enjoyed your company. 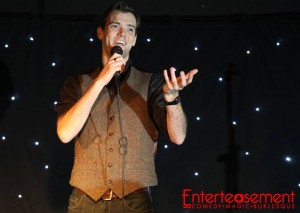 Chris, our actor / comedian does a great job comparing.  He’s very friendly and he doesn’t pick on anyone so the front row were pretty safe.  Highlights for me are always the Lion King song (I’m not spoiling it) the bit about his English Granny and the combination of films to make a better film is not only very creative but very funny.

It’s exciting times for Chris as he’s appearing at our last comedy only night of the year on November 29th….oh and he’s also got loads of TV stuff on BBC at the moment to look forward to (Scot Squad BBC1 on Monday Night’s 10:35pm). 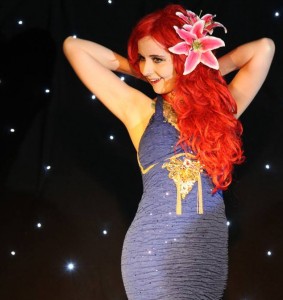 Lou-Leigh contacted me in March last year as she was in the area and looking for a spot on one of my shows.  She’d send me a video and I’ll be honest I thought the act was good but I wasn’t rushing out to book her.  What I didn’t know was that she’d edited out the best bit of her act so it was kind of  like making a judgement call of The Usual Suspects without seeing the last 5 minutes of the film (If you haven’t seen the Usual Suspects…go do that now) After seeing her act (including the end) I was amazed – it was Enterteasement in a nutshell.  Funny, flirty, professional….I loved it.  So this time she came back up, we gave her the headline slot.  She opened the show with a high energy routine that was very blue…not dirty blue, as in the colour blue and finished with her Where’s Wally Comedy routine.  Both acts were really well received

Lou-Leigh Blue:  She has a style of her own 🙂 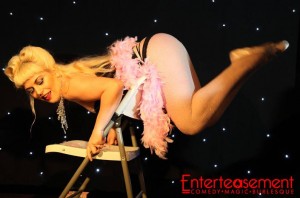 Ash McTease , a burlesque teacher from Glasgow, attended the first Enterteasement show and has always been a big fan/supporter of what we do.  She contacted me a few months ago with the idea of giving one of her students the opportunity to perform at Enterteasement.  Her students were invited to audition and after several weeks of burlesque lessons Miss Innocence Bliss was chosen.

Taking to the stage for the first time is a terrifying experience for anybody; however, most new performers make their debuts alongside other new acts and aren’t following a professional burlesque artist.  On Saturday she had a big following which I’m sure makes things easier and more difficult at the same time. Truth be told as nervous as she may have been she left the nerves in the changing room as she bounced onto the stage.  She started with a feather boa routine and moved into some impressive chair work finishing with a big glitter finale. 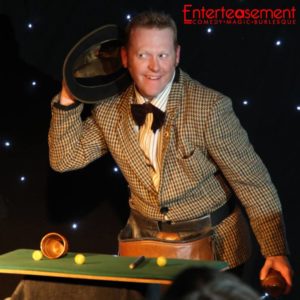 Todd is an exceptionally talented Street Performer.  The pressure of street performance is very simple.  If you don’t do well you don’t get paid.  You need to be on top form from start till finish as 10 seconds of dead time and you’ll have lost some of your audience.  Todd is exceptionally funny and his audience interaction is second to none.  So it surprised me to hear that he’s leaving his greatest strength behind – Yip Todd is giving up his voice and performing a silent act under the name Ruse.  He started by choosing a volunteer, training the volunteer, before moving onto make a handkerchief vanish and reappearance in the spectators bank note.  Then he swallowed a 4ft balloon before performing a rope routine and then finishing with his signature “cups and balls”.

This was Todd’s first time performing as Ruse, it was an excellent routine that I’m sure will start making its way across the UK Cabaret circuit. 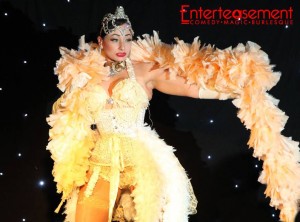 Hettie performed different routines on the Saturday and Sunday and both were presented with professionalism and flair.  Her professionalism really shines through in her routines as everything from the shoes to the her fans are exquisite and classy. 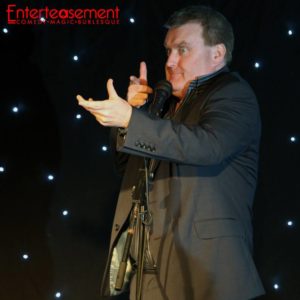 Raymond is probably the most naturally talented comedian in Scotland, he doesn’t really have a learned set so most of the time he just opens his mouth and whatever’s in his head spills out.  Unfortunately for us on Saturday Raymond had just come from another gig performing in front of 8 people so he wasn’t in the best of moods.  So his set started with how his last show started and this moved into a story about the best heckle he’s ever had as this was recently mentioned on Loose Women.

On Sunday he told one of my favourite Raymond Mearns stories about a bus journey.  What I love and hate about this story is that it’s comedy gold that I’d heard Raymond tell about 7 years ago.  Most comedians in the country would kill for a bit of material like this, but Raymond couldn’t remember it until I reminded him about it back in March.  I don’t know if he remembered that I liked this story or if he just looked into the front row and saw my girlfriend (who was there when I reminded him of it) but it was great to hear it again and was a good close to our November weekend at Enterteasement.

HIGHLIGHTS FROM THE WEEKEND

Lou-Leigh Blue is from Bristol so you have to imagine her asking this question in an English Accent:

“Chris? What’s a fud?”
After explaining, she says, “Oh, I’ve only just discovered what the other one means but I can’t say it right – The Boaw Bea”
Me: “The Boaw Bea?”
Lou Leigh: “Yes, the Boaw Bee – the another name for a man’s parts”
Gary Fauld’s (I think it was him) said “Aww! She means The Boaby!!”

Neil McKillop has been one of our longest attending regulars.  On Sunday night he and Joanne turn up and Neil looks slightly confused as in the audience were his parents! Neil then said, that’s them been here the last 2 shows.  All of our Main regulars were here this time.

When those doors open, I’m humbled by their work ethic.  We’ve no room for passengers, the show runs on a 5 minute window and we haven’t over ran in 12 months! Some achievement when you consider some comedy nights with 4 acts over run by over an hour and we have up to 8 acts, a raffle, comment cards, props, stage management, chocolates  etc.

An extra special thanks to Gary Faulds, who steps in as sound man If you can’t remember who he was, he was the guy with the brush helping out clean the stage at one point, he wasn’t asked to do that, neither was he asked to turn up 2 hours early to go over everything on the sound desk or to bring in his IMac to play the music more efficiently.

The Biggest Burlesque club in the World.  I had the pleasure of performing for Club Noir for a couple of years and without them Enterteasement wouldn’t be here today.  When I mention burlesque to people they either say, “What’s that strippers?”  Or “Oh, Burlesque – I love that – I go to Club Noir”  The fact they have 2000 people at their shows every other month has allowed a vibrant burlesque scene in Glasgow to grow.  So not only do we have an audience wanting burlesque but we have burlesque performers and teachers bringing new talent through.

Many of the procedures Tina & Ian ( the owners of Club Noir) implemented in running Club Noir I have implemented in Enterteasement, albeit on a much smaller scale.
So after 3 years of Enterteasement, Tina & Ian finally decided to pop in and watch our small show.  It was very strange to have burlesque royalty in your audience  The next day they posted something nice about us on Facebook to their 8000 strong fan base, so big thanks to them and I hope to see them back again soon.