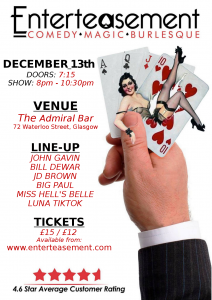 Christmas is a time for giving and on December 13th we’re giving you a top class Comedy Magic & Burlesque show right in the heart of Glasgow.  If you haven’t booked your office party or a wee cheeky date night then come join us and see why we have a 4.7 star average customer review and a reputation as one of the best nights in Glasgow.

Warning: this show will sell out quickly!

‘Scottish Comedian Of The Year 2009’, John made it to the final of the prestigious ‘So You Think You’re Funny’ in 2008 and has since become one of the UK’s most in demand headline acts.

Big Paul The Magician is a 2 times winner of the Scottish Conjurers’ Association Stand-up Magic contest.  He mixes, comedy, magic and playfulness to create a ‘must see’ magical experience.

Finalist for the U.K.’s ‘Alternative Model of the Year’ 2014, From USA, She studied at The New York School Of Burlesque and presents well choreographed routines fusing several styles to create powerful routines.