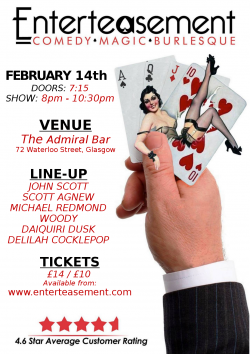 FEBRUARY 14th – Our first Comedy! Magic! Burlesque show of 2015!! Why not treat your loved one to something special on Valentines Night? Our 4.7 star rating shows consist of: As Seen On TV Comedy, Award Winning Magic & International Burlesque performers.  So if your looking for a good night out that’s a little different then Enterteasement might just be perfect for you!  After a fantastic 2014 where we gained a reputation as one of the “Must See Shows In Glasgow” we’re proud to be back and excited to see if we can raise the bar even higher in 2015. If you’re looking for something a little different get your tickets soon, as we will sell out!

Making his first appearance at Enterteasement! John is a regular headliner all over the UK. His impressive CV includes supporting Frankie Boyle & Tom Stade and in 2010 was the winner of biggest cash prize in Scottish Comedy – a whopping £12,000

Scottish Comedian of the year 2008 Winner, Scott has been described as a master storyteller and has many 5 star reviews and sell out Edinburgh Festival Shows.

Irish Comedian best known for his role as ‘Father Stone’ in the legendary Father Ted. He has made several other TV Appearances and is one of the best loved comedians in The UK comedy scene.

Magic Circle Magician and 5 x Scottish Close-up magic champion. Woody is one of the premier comedy magicians on the comedy circuit. His style combines Dynamo style magic with hints of Kevin Bridges humour

4 Yeses from Britain’s Got Talent and a standing ovation from Amanda Holden. Since Then Daiquiri has become an International Burlesque Sensation recently becoming a Finalist at the prestigious Milan Burlesque Awards.

Making her Enterteasement debut, the beauty from Barcelona will be turning up the heat with her modern twists on a classic burlesque routine.