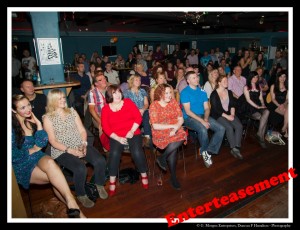 2012 was a great year for Enterteasement.  We’ve learned so much and grown into a premier night of entertainment.  Not only do we have our regular audience members who attend every show the word is spreading and we are attracting a new branch of people.  We also have some top acts now contacting us to perform on the bill which is a dream come true.  Most importantly for us though is that we’re selling out every show now so the word is out and Enterteasement is hear to stay.

It hasn’t all been plane sailing though which is actually great for us because we evolve around the audience and that’s something that has allowed us to grow so quickly.  So we’ve had a couple of issues with the booths and therefore not only will we fix this but we’ll make the booths uber amazing in 2013.

As the organiser of Enterteasement it’s been great for me that I have a team in place that can handle the night when I’m not there and we’ve managed to secure a sound girl Alice and another assistant Star who is great at showing initiative. 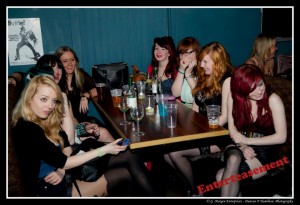 The Mad front row who had never been to a comedy show before and didn’t know the etiquette of a show so decided to walk on stage and high 5 the compere (his face was priceless).

Act of the Year

We really couldn’t pick one as we’ve had so many excellent performances.  Magic wise we had Evil Big Paul, The Camp Professor, Gary and the Mind reading chicken, The mind-reader Colin, Woody the owner and Scott from the Go Compare Advert.

Burlesque wise we’ve had too many performers to mention.  Daiquiri Dusk, Cat Aclysmic & Stakatto  Blue were our most regular performers but we also had Scarlet Fever burlesque troupe and we’ve even attracted performers from London & Newcastle to come and perform for us.

2012 was a great success, we’ve improved the acts, the lighting, introduced a back curtain, brought in new staff and a proper sound person.  We’ve had a couple of hiccups along the way and I’m sure we’ll have some more but overall this is very exciting times for us.

Thanks for the continued support!