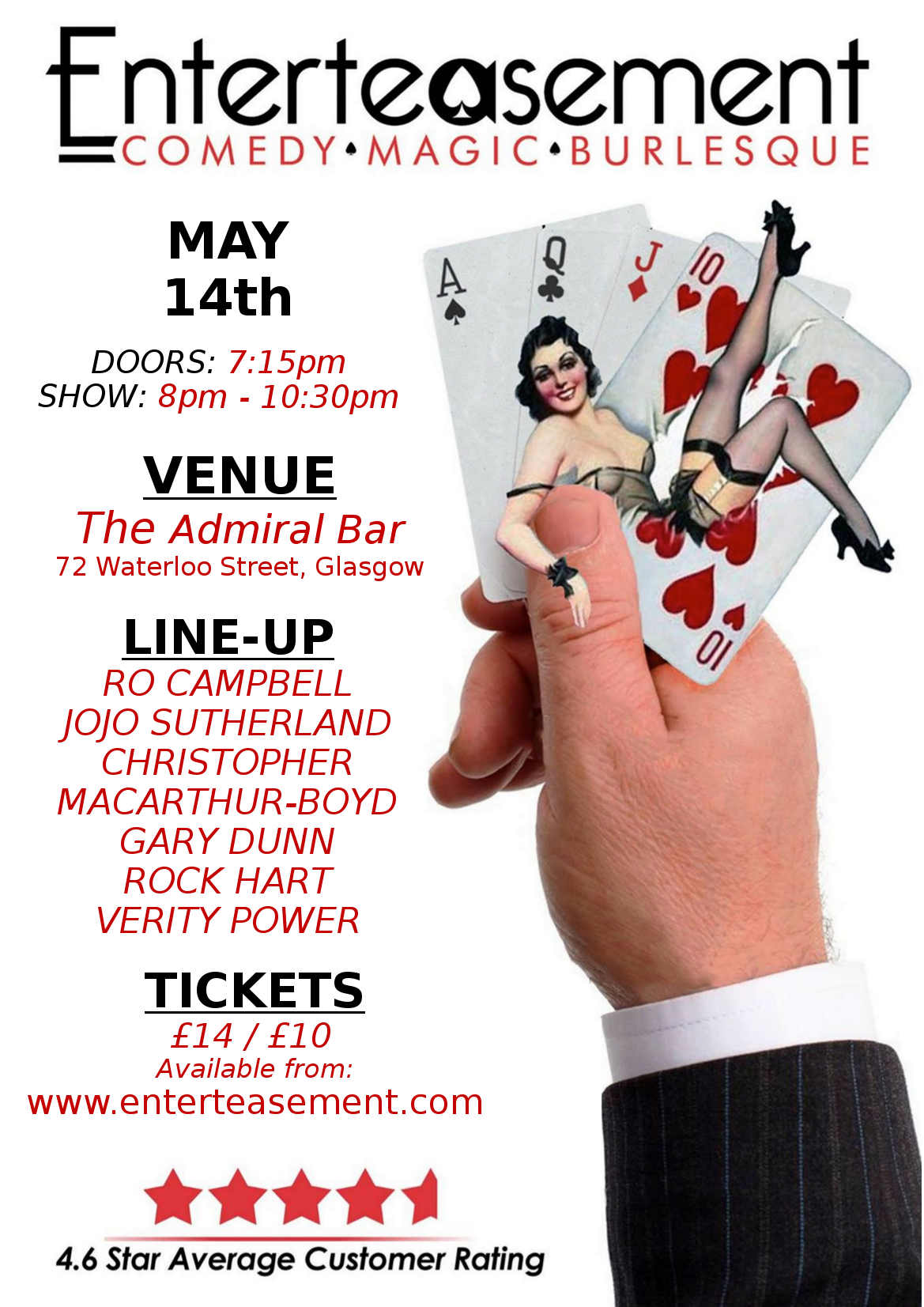 Our May 14th installment of Comedy Magic & Burlesque is a perfect blend of some of our all time favourites mixed with those taking their first steps onto the Enterteasement stage. We have; award winners, ‘As Seen On TV’ performers, International acts….all we need is you – our audience.

Reasons to come to Enerteasement:

1) It’s one of the best ways to spent your Saturday night in Glasgow
2) Our shows are one offs, there will never be another chance to see this show
3) Our staff welcome you with free chocolates
4) Not only is our venue 3 minutes walk from Central Station, it’s also been nominated as ‘Best Comedy Venue in Scotland’ (Billy Connelly even did a gig there)
5) Do you really need a fifth reason? Ok, just read the line-up.

Our Australian headliner is an International comedy sensation. He’s received many 5 star reviews at The Edinburgh Festival, was the winner of Scottish Comedian Of The Year in 2010 and recently supported Kevin Bridges!

Comedian and Actress, JoJo is one of the most in demand comedians on the Scottish Scene.  This hilarious performer has just released Internet Sitcom “MUFF” which stars Tom Stade & Daniel Sloss   Her slightly dry / dark side maker her not only very funny but also an Enterteasement favourite!
“A performer the audience could have watched all night” The Herald

One of the biggest names in comedy…literally! Runner up in Scottish Comedian Of The Year 2015 CMB is one of the most exciting new talents in Scottish comedy and is tipped to become Scotland’s next big thing.

All the way from Newcastle, Gary has been a professional magician for over 10 years and has been an Enterteasement favourite since his first appearance. He recently sold out his Glasgow Comedy Festival show at The Stand cementing his reputation as one of the best comedy magicians in the country.

An International Male Burlesque performer. Winner of the Best Performer Award 2014 at The Varietease Tea Time Tassel Off.

Model, burlesque teacher, stilt walker – is there anything this girl can’t do? She’s one of the highest rated burlesque performers in Scotland and was on the first Enterteasement bill nearly 5 years ago!