Are your weekends boring? Would you like to try something, new, exciting and fun?  Then join us at Enterteasement, Glasgow’s monthly Comedy Magic Burlesque show.  Our last two shows have sold out and our October 8th line-up is potentially the strongest line-up ever!  So come on down to the best show in town and celebrate your weekend in style.

* Warning – we’re expecting a sell out so don’t leave it too late to get your tickets! 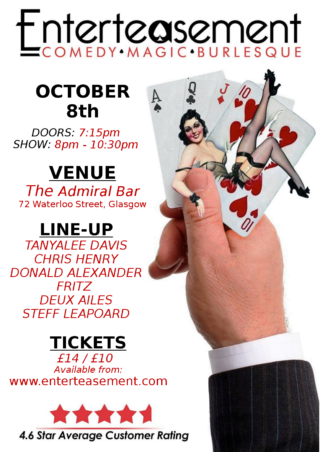 Tanyalee is a Canadian comedian who has appeared on BBC’s:‘Live At The Apollo’ and  The John Bishop Show. She also proudly boasts a 6 months live solo show at Las Vegas.  This incredibly funny powerhouse of comedy stands at 3’6″ and is highly regarded as one of the funniest working comedians today.

A former ‘Scottish Comedian Of The Year’ Finalist, Chris has appeared on TV, Radio & Internet Sitcom MUFF.  However, this cheeky charmer is most commonly found entertaining at some of the biggest comedy clubs in The UK.

“He was good. He was very good. In fact, he was exceptional.”  Evening Express

Every year a new star emerges in Scottish Comedy. This year that star is Donald Alexander.  His surreal, observational comedy is delivered in a loveable, anxious style.  See him now, before he’s made it big time and you can tell everyone “I saw him first!”

FRITZ With A Z

Fritz, is a world class magician.  If you’ve ever been in Holland and seen a magician on TV, it was probably Fritz.  He’s been described as The Dutch Dynamo (but with a personality).  He’s  received 5 star Reviews from the Edinburgh & Melbourne Magic Festivals described as “Amazing”  by Jermaine Jackson.

From  Enterteasement audience member to burlesque performer. Since graduating from the Academy Of Burlesque and Cabaret, she’s taken the burlesque world by storm and has even danced on stage with Rod Stewart