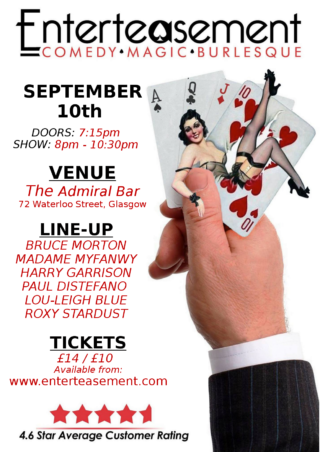 Enterteasement’s September 10th installment of comedy, magic and burlesque will have the feel good factor for the perfect night out. If you’re anything like us, when it comes to the weekend you’re looking for a good night out, that’s a little different and doesn’t break the bank. Well imagine spending the night watching, As Seen On Tv acts, Award winners and International performers right in the heart of Glasgow…the drinks prices aren’t bad either. So what are you waiting for? Come on down to the best show in town and celebrate your weekend in style.

Perrier nominated comedy legend, co-founder of STV’s The Funny Farm and first ever winner of the prestigious ‘So You Think You’re Funny’ contest. Bruce is one of the UK’s most respected headliners.
“He can tell a story as entertainingly as Billy Connolly, but the sting in its tail is in a class of its own” –The Times

Madame Myfanwy is the creation of the very talented comedian Sian Bevan, Although, one of the most popular hosts at comedy clubs throughout Scotland, Sian created Madam MyFanwy, a raunchy comedy -burlesque instructor specifically to MC at cabaret events.

Paul is an International magician from the USA. His combination of magic, mind-reading and comedy is simply world class. He’s regularly in demand for celebrities such as Leona Lewis and Uri Geller.
“Paul is charismatic and has great stage presence.” URI GELLER

Founder of The Glasgow Burlesque Festival with 2 US tours under her suspender belt. Roxy uses her acting background to create unique, fun and quirky routines with comedic undertones Come see…”The Face that Can’t be Tamed”

One of our favourite all time burlesque acts is returning to Enterteasement! Bristol based, Lou-Leigh Blue has packed her case and will be bringing her quirky, bump and grind burlesque with a B-movie twist all the way to Glasgow for one night only.