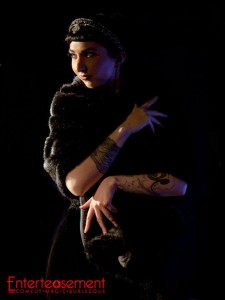 If you were there and have a few minutes, please fill in the survey to help us know how we’re doing
http://www.surveymonkey.com/s/Z3TXLPY

We purchased 4 chairs for the venue, we know it’s not much but that’s 8 feet that didn’t wake-up with a hangover from the night before.  We also now have another 6 stools brought down from upstairs so we’re going to try to keep this for every show.  So 12 extra people got seats for this show.  Sorry we’re not fully seated yet but we’re over 80% seated and we do limit the ticket sales to ensure there’s not too many people standing.

Bruce took to the stage and was chatting to the audience.  Since we start at 8pm rather than 9pm we usually get off to a slow start and the audience are a little nervous of the compere.  Bruce came on nice and relaxed and done a great job compering and kept the show on time.  The highlight had to be the tooth joke that he started in the first section and kept it going throughout the whole night.  The piece about the “he said, she said, you said, we said”  was also incredible and received a great round of applause from the audience.   Once they were warmed up it was time for our first comedian. 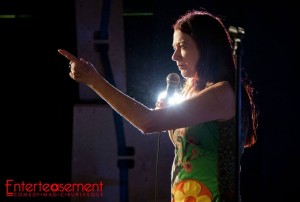 Susan came onto the stage and in a strong English accent announced she was from Glasgow…it’s actually true!  She moved to England to further her career and the English accent has infected her 😉 So the audience were a little confused at first but she won them over.  Her chat with the audience was excellent.  We discovered that one lucky gentleman in the audience perhaps didn’t love his partner but she did love…erm, pleasing him.  He seemed happier to inform us of that than she did though.  Next up was a lovely looking young thing in the front row.  Conversation moved into tattoos and the girl in the front row very innocently announced that she had 2 tattoos, 1 Japanese symbol and one butterfly.  Susan asked her, “Where’s the tattoo and she responded, “On my arse”  Her timing was brilliant but unfortunately she wouldn’t show us it. 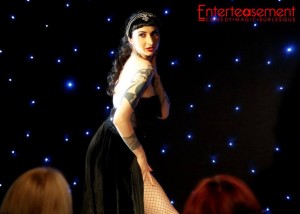 Cat Aclysmic came on stage and I don’t think she’s ever looked better.  She performed a very classy burlesque act and it was a great start to the show and allowed the audience to relax into the whole burlesque thing.   Cat came back onto the stage to perform one of her new signature pieces.  Not many people do comedy-burlesque and even fewer do it well but Cat really does it exceptionally.  She had her new devil routine and kept the audience guessing what was going on but the big finish was just amazing!  I won’t spoil it – just go and see it. 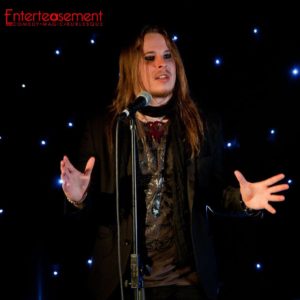 Dee opened with a classic mind-reading effect in which vocal tonalities and body language are measured to see who is telling the truth.  3 white stones and one black stone were handed out to audience members and Dee successfully managed to find who was holding the white stone.  Next up was the chance to win a member of the audience.  A female was brought onto stage and chained up.  4 male audience members were then brought onto stage and 5 keys were displayed.  If the audience member chose the correct key it would unlock the padlock and they could keep the girl.  After 4 unsuccessful key choices were made, Dee revealed the only remaining key fitted the padlock and the women was freed.  Dee then closed with a cludo type experiement where a murder weapon was found amonst different people’s

Rosie came onto the stage and her energy was fantastic. She really knows how to engage with the audience.  Burlesque is about telling a story and rather than simply taking off clothes her clothes were her act!  Yip, her outfit was an octopus and as each tentacle/ leg / arm (whatever an octopus has) was removed to show more of Rosie.  It was a fantastic act and a fantastic performance – this was only Rosie’s first performance for us but it certainly won’t be her last!

The reverend came on and immediately started slagging off our manager Star.  His dark style isn’t for everyone but it’s certainly original.  Jimmy Carr once said his favourite type of laugh was when someone laughed then groaned after it because they felt guilty about laughing.  That’s what The Reverend’s whole act is!  Skilfully offensive and very funny.

We’ve known of Susan Murray for 3 years and Dee Christopher for over a year.  Because these guys are down in England we don’t really get a chance to see them so it’s good that Enterteasement can bring us all together.

Highlights of the night

1) Returned home to a friend request from someone who was at the show.  She mentioned what a great time she had.  She has always wanted to see burlesque and her friend bought her a ticket for her birthday.  She has now decided that she wants to take burlesque lessons and she’d like to perform for us one day.  This makes us very happy.

2) Our lady of the Door, Lisa, held her camcorder perfectly still for 20 minutes to film one of the acts…only to realise she forgot to press record.

The CD player at The Admiral is very sensitive and one of the acts music wasn’t playing correctly.  Luckily…a copy was sitting in her account and after borrowing a phone from the photographer this was downloaded and played no probs.  How clever these people are – if it were up to me…I would have found someone in the audience to sing it…good job I’m not in charge of the technical stuff.

Thoughts…we had some people saying that they found The Reverend Obadiah quite offensive.  Quite offensive?  He’s very offensive – that’s his act.  That’s why in all the advertising we said he was “offensive, evil and a writer for Frankie Boyle”.  So…we’re sorry but we put a lot of thought into our shows hence why we had the devil act (dark) with the rev (also dark)  We describe what the shows will be like description before coming to the show.

Next show November 9th – hope to see you there guys 🙂