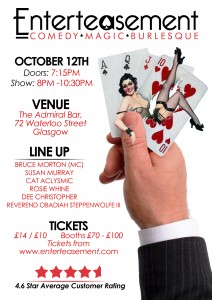 Enterteasement’s October 12th Comedy, Magic, Burlesque show has a line-up of Superstars! 9 out of our last 10 shows have sold out and this one is predicted to quickly follow suit. We have 3 ‘As Seen On TV Comedians’, (2 of whom have appeared at Enterteasement before and are back by popular demand). 2 of the hottest burlesque dancers in the UK and one of England’s highest rated alternative magicians.

Combine this with our fun, friendly atmosphere and we have the perfect excuse for a Saturday night out.

THE REVEREND OBADIAH STEPPENWOLFE III: This man is an evil comedian; however, when you can offend as many people as him and walk away with a 5 star reviews at The Edinburgh Festival then he’s unquestionably talented. Successful co-writer and performer in Channel 4’s Tramadol Nights with Frankie Boyle. We had him back in April and he as exceptional!

BRUCE MORTON: Perrier nominated comedy legend, co-Founder of The Funny Farm & The Greater Shawlands Republic. After headlining for us earlier in the year he wrote an article about Scottish Comedy and included Enterteasement as one of the good guys, so we had to get him back.

“He can tell a story as entertainingly as Billy Connolly, but the sting in its tail is in a class of its own” –The Times

SUSAN MURRAY: One of London’s most popular female comedians. First ever winner of the Jongleurs ‘New Act’ contest. Numerous TV Appearances including ‘Puppetry Of The Penis’.

CAT ACLYSMIC: Burlesque Dancer From USA and one of Enterteasement’s all time favourites.

ROSIE WHINE: Rosie burst onto the burlesque scene in 2012. Because the night had that dark feel to it we thought we’d introduce something cute, innocent, blonde and incredibly beautiful.

DEE CHRISTOPHER: The alternative magician/mind-reader is on tour of Scotland lecturing on his Rock & Roll style of magic. For those Criss Angell / Derren Brown fans out there – this isn’t to be missed!