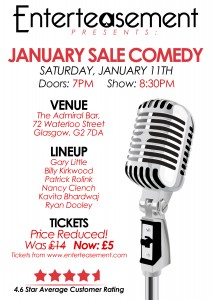 Happy New Year everyone,  We normally take January off but as luck would have it The Admiral was vacant and potentially our favourite Headliner & MC were free so we’ve decided to put on a January Sale Comedy Show (No magic or Burlesque this time) So you’re getting a show that should be £14 but it’s reduced to £5.  Now you won’t be able to see any of these acts for less than £10 this year anywhere in the UK and we’ve got 4 top hedliners and we’re giving some stage time to some newbies as well – so you might get to see the next Kevin Bridges!

THIS SHOW HAS SOLD OUT

GARY LITTLE:  In 2013 Gary sold out all 4 shows at The Glasgow comedy Festival.  He’s headlined for us 3 times at Enterteasement and has always blown the roof off the place.  Regular at the Stand & Jongleurs.

BILLY KIRKWOOD:  Our favourite compere returns!  Billy is Mr Fun and his comedy is so infectious that we get constant requests for him to come back…oh he’s also a Bafta Winner.

PATRICK ROLINK: Finalist in So You Think Your funny Back in 2003 Patrick is a regular on The Jongleurs Tour and travels the world with his comedy.

NANCY CLENCH:  5 star reviews at her Edinburgh fringe show.  Nancy has burst onto the comedy scene in Scotland.

KAVITA BHARDWAI:  Kavita is relatively new to the Scottish scene but when people say “That funny /mad asian glaswegian lassy”  We know they’re talking about Kavita.

THIS SHOW HAS SOLD OUT