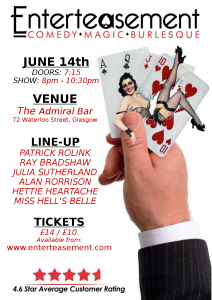 Our June 14th Comedy Magic Burlesque show will present death defying magic, beautiful burlesque and hilarious comedy from some of an all star cast of award winners and TV stars.  Enterteasement is still flying the flag for variety with a 4.7 star average customer rating and 2 years of continuous sell out shows this is not one to be missed!

Parick Rolink:  Finalist in ‘So You Think Your Funny’ back in 2003, Patrick is a regular on The Jongleurs tour and travels the world with his loveable fusion of old fashioned jokes and modern story comedy.

Ray Bradshaw: 2 x ‘Scottish Comedian Of The Year Finalist’ Ray is one of the most in demand compere’s in Scotland.  His relaxed, friendly, welcoming style makes you think you’re watching the show from the comfort of your living room.

Alan Rorrison:  With a CV James Bond would be proud of:  Creative Consultant for Dynamo & Troy, Alan is one of the most ingenious minds in magic.  in 2012 he appeared on Penn & Teller Fool us and Fooled Master magician Penn Jelitte.

Hettie Heartache: Channelling the allure of the 30s-50s Hollywood starlets  Hettie is a World Burlesque Games Performer  specialising in classic burlesque – if you’re allergic to feathers…don’t sit near the front.