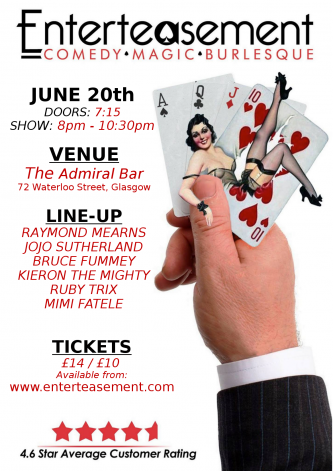 Our June 20th: Comedy Magic Burlesque show could be show of the year!

With us having – 3 of the finest Stand-up comedians Scotland can offer, 2 of the very best comedy-burlesque acts and a “magic” act strong enough to win Britain’s Got Talent- you know you’re going to be in for a night of top class entertainment!

This may be the strongest line-up we’ve ever put on our stage!

That’s pretty impressive when you consider we’ve had a 4.7 star average customer review over the last  18 months alone.

So if you’re looking for a good night out with something a little bit different, then celebrate the weekend with us at Enterteasement and get your tickets now!

Simply put, Raymond is one of the funniest humans on the planet. We are delighted to have the man none other than Frankie Boyle described as “A Genuine Improvisational Genius”  back on our stage.

Comedian and Actress,  JoJo is one of the most in demand headliners in the UK.

Her highly anticipated Internet TV show (which features BBC’s Live at the Apollo stars Daniel Sloss & Tom Stade) will be released in a few months time.

“A performer the audience could have watched all night”- The Herald

Winner of Scottish Comedian Of The Year 2014, Bruce is a natural story teller and has just returned from a successful tour of Australia.

Our multiple award winning magician has dedicated the last 6 months of his life learning a new skill that only a handful of people in the world can perform – regurgitation!

This is the worldwide premier of this performance from Kieron and not to be missed!

This sultry vixen utilises her strong background in acting to create strong storytelling burlesque at it’s finest.
We saw her newest act a few months ago and we immediately booked her.

Our Miss Scotland Pin-Up Finalist is not only a model but also an International burlesque performer.  Having graced stages  here in the UK & in the USA it’s time for her to make her Enterteasement debut, with a hilariously sexy act.