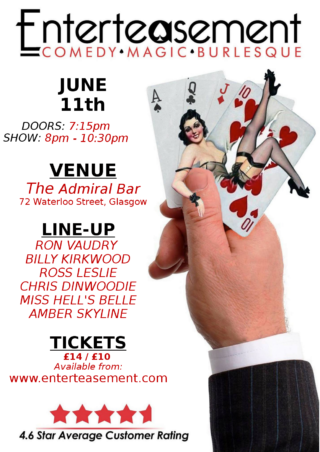 Have you ever been to a Comedy! Magic! Burlesque! birthday party? Well now’s your chance!  It’s our 5th Birthday and we’re ready ready to celebrate in style.  What’s more – you’re all invited!

Our show includes some of the very best entertainers in the world today.  Our line-up includes a fusion dancer from London, one of Canada’s great stand-up comedians and all will be hosted by our favourite ever compere.  This is not a show to be missed!

“His rapier wit and existential angst shine through in his act like a dark beacon from hell.” – – NOW Magazine.

Winner of ‘Best Scottish Compere 2014’ at the Scottish Comedy Awards.  Billy’s done everything in Comedy from hosting at the most prestigious comedy clubs;  music festivals & ICW wrestling matches.  However, we feel his high energetic, playful,  friendly style makes him perfectly suited to Enterteasement.

In 2014, Ross reached the final of 3 separate competitions, ‘Scottish Comedian Of The Year’, ‘Nandos UK New Act’ and ‘Deuchars Beermat Fringe’.  Since then he’s went onto find his comedy voice and has become one of the most promising new comedians in Scotland

Amber is a fusion dancer from London. She’s been performing her unique belly dancing style at sell-out cabaret shows all over the UK and was a big hit at her Enterteasement debut.