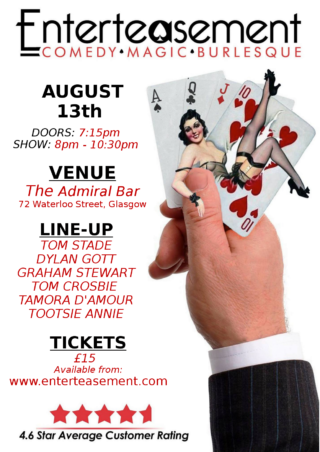 Our August Comedy! Magic! Burlesque! show has always been our most exciting show of the year. With entertainers flying in from around the world to perform at The Edinburgh Festival we hand pick the very best acts and bring them to Glasgow for one night only. For the past five years this show has sold out prior to the doors opening, and this year we’re expecting it to sell out faster than ever. Why? Because five years ago when Enterteasement started, we had a bucket list of performers we wanted to book, and at the very top of that list was

TOM STADE! And I’m glad to finally announce – We’ve booked him. The last time Tom was in Glasgow he SOLD OUT The Kings theatre holding 1700 people and now you get to see him up close and personal at The Admiral Bar holding just 120 people.

Warning: Less than 15 tickets funky tickets remaining, VIP and tables have all sold out.

Please note, The Admiral is roughly 90% seated and the seats are allocated on a first come, first serve basis.  In the event of a sell out, 10%of people will be standing.  To ensure you get a seat, please turn up early or purchase a VIP Reserved seat)

Star of BBC 1’s ‘Live At The Apollo’, Michael Mcintyre’s Roadshow & The John Bishop Show. Simply put, Tom Stade is one of the funniest comedians on the planet. He has received more 5 star reviews than you’ve had hot dinners.

Dylan is one of the most exciting acts to come out of Canada in recent years. His natural storytelling ability end clever punch lines could see him rise to the very top of comedy – see him here first!! (A Laughing Horse ‘Best New Act’ Finalist 2015) GRAHAM STEWART Comedy comes in all different shapes and sizes and Graham’s award winning comedy-magic, presented in Tommy Cooper style, will have you in stitches. His death defying demonstrations of daftness will leave your cheeks sore.

Tom is a self-professed magic nerd. Don’t be fooled into thinking ‘magic nerd’ sounds boring. Tom’s one of the most respected magicians in England! His performances have won multiple awards and have been shown on TV. “Bloody Good Stuff – Keep That Up And I Might Be Out Of A Job!” – Derren Brown

All the way from London, Tamora is a stunning, International, neo-burlesque performer and model. Her well-crafted routines mixed with funky 90’s music have taken burlesque into the 21st century.

Finalist in Miss Pin-Up Scotland 2015, Tootsie burst onto the Scottish Burlesque scene in 2014 and is now one of the most popular acts on the UK burlesque scene