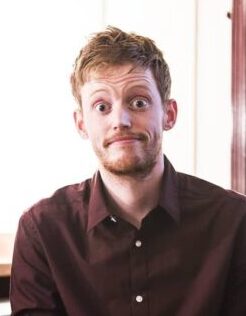 Enterteasement’s Comedy! Magic! Burlesque! turns 11 years old.  What started as a one-off show has grown into one of the best monthly variety shows in Scotland – If not the whole of the UK.  so if you’re one of our regulars or if you’ve never been before and are going to join us on our journey, pop on down on June 4th for a spectacular night of comedy, magic & burlesque!

Explanation of the ticket types click here
* Tables Sold Out
* VIP Likely sold out
* Less than 40% of tickets remaining.

ROBIN GRAINGER
Robin Grainger gigs for major comedy clubs across the UK. He has performed in sell-out Edinburgh Fringe shows, and has supported Tom Stade (Live At The Apollo) on multiple national tours, being hand-picked for a DVD recording and gigging to 1500 people at The King’s Theatre in Glasgow.

Billy’s quick wit, off-the-cuff antics, playful conversation and fast-paced crowd work has earned him spots on some of the best stages in the world, as a highly in demand performer.

PAUL MCDANIEL
Our Northern Irish Comedian Paul McDaniel has shared the stage with Frankie Boyle and Fred MacAulay. He’s been a ‘Scottish Comedian Of The Year’ finalist and is one of the most popular acts on the circuit.

ALAN RORRISON
Master Magician Alan is one of the most creative minds in magic today. He has worked as a creative consultant for Dynamo and appeared on Penn & Teller Fool Us.

LILY WHYTE
Making her debut, all the way from New York it’s Lily Whyte!! In the big apple Lily specialized in ariel performances often scene in nightclubs.  Then she caught the burlesque bug and flew to Glasgow to sample the world famous Glasgow Burlesque scene.

What’s hotter than red hot? That’s right – White hot!  Our White hot blonde brings so much heat in her performances that she’ll set the room on fire!