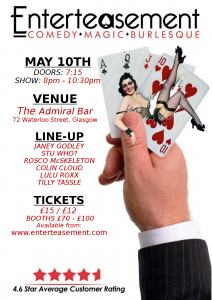 Enterteasement is a Comedy Magic Burlesque show that sells out every month, we have a 4.7 star average customer rating…and IT JUST GOT BETTER! The May 10th Line-up is potentially our strongest of all time! This is NOT A SHOW TO BE MISSED!! The line-up for this month will probably be stronger than any show in the UK and it’s right here in Glasgow. Only 130 people get to see it! Get your tickets now!

JANEY GODLEY
The Queen of Scottish Comedy: More 5 Star reviews and sold out shows than many could dream of. Janey is simply one of the funniest comedians in The World!

STU WHO?
The Godfather of Scottish Comedy! One of the original members of STV’s The Funny Farm, Stu is a Comedy legend who like a fine wine keeps getting better with age.

ROSCO McSKELETON:
One of the most unique character acts to come out of Scotland in the last 5 years. What was created as a ‘one off’ has become an act not only audiences love but comedians love watching.

COLIN CLOUD
The Forensic Mind-Reader / Mentalist. Colin has appeared on BGT & Penn & Teller ‘Fool us’. Widely regarded as one of the most entertaining mentalists in the world!

Event management for Enterteasement: May 10th powered by Eventbrite
Cart
Please follow & like us :)
Up Coming Events