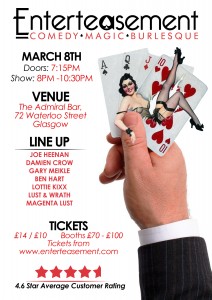 Our March 8th; Comedy! Magic! Burlesque! show will be dark & unforgettable! Our last ‘Dark Show’ was a SELL OUT and one of our most talked about shows of all time. As our January and February shows have sold out in record time we decided to offer something totally different for March. The line-up is full of quality with AWARD WINNERS, AS SEEN ON TV ACTS and INTERNATIONAL PERFORMERS. This line-up is not for the faint of heart or easily offended.

JOE HEENAN: Joe is a regular MC at The Stand, finalist in ‘So You Think Your Funny’, writter for Chewing the Fat and has the most contagious laugh in the business.

DAMIEN CROW: 4 Star Reviews of his Edinburgh Fringe Show. This is the character of the extremely talented Comedian and actor Chris Forbes. Damien explains the struggles of being a middleclass Goth in modern Glasgow culture. This act is very enterteasement!!

GARY MEIKLE: Burst onto the scene in 2013 and made it to Scottish Comedian Of The Year Semi-Finals on his first attempt. Gary’s one of the hardest working and fastest improving comedians in Scotland so we’re delighted to have this mini muscle man on the bill.

LOTTIE KIXX: World Burlesque Games Star. Lottie has been one of our most talked about acts since performing for us in 2012 when she blew the roof off the place! Finally got her back on the bill – “An unmissable performer”

MAGENTA LUST: Magenta is an International alternative burlesque performer. Her playful combination of burlesque and grotesque saw her climb the ranks of Scottish burlesque and recently headlined The Berlin Burlesque Festival.

LUST & WRATH: Magenta Lust and General Victor Draco team up to perform one of our all time favourite burlesque acts – it was so good it won our ‘Act Of The Night’.. It’s dark, sexy, powerful and has a comedy element – everything a burlesque act should have!

TICKETS HAVE SOLD OUT