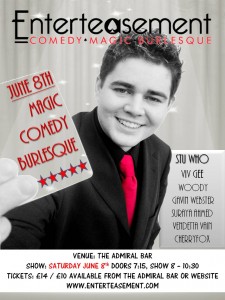 Reasons to celebrate at Enterteasement on Saturday 8th June include:

Yip, we turn 2 years old on June 8th and what a 2 years it has been. From the early days where we were avoided by Comedians, Magicians & Burlesque acts to having top stars from all round the world perform for us. Our May show sold out before the doors had even opened and received a new record 4.7 star average customer review!
Dare I say it…I think June could get 4.8 stars and with this line-up anything is possible. 3 Headline TV Comedians, Magic Circle Magician Woody, Burlesque from 2 World Of Burlesque Stars and a belly dancer from MaryHill…(kidding)

STU WHO: The Legend that is STU WHO was part of The Funny Farm who were a group of Comedians (Including Fred McCauley) who built the Scottish Comedy Scene and got a TV show in the process.

CHERRYFOX: Making her Enterteasement debut, Cherryfox is one of the few Sing & Fling burlesque artist based in the UK. Our first ever Burlesque act who sings at the same time – talk about multi-tasking.

VEDDETTA VAIN: She’s a cheeky wee charmer with choreography & originality that has established her as one of the most sought after burlesque stars in the UK. An Enterteasement Favourite!

SURAYA AHMED: Making her Enterteasement debut, Suraya has performed alongside the World Belly Dance Superstars and taught Belly Dancing on The Virgin 1’s TV show: ‘The Naked Office’ We’ve never had belly dancing before but we thought we’d mix it up a little since it’s our birthday!