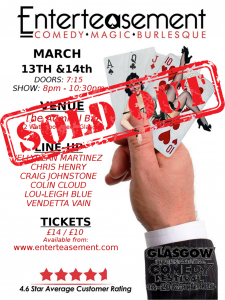 Wow – what a weekend! Last year’s comedy festival show was good but this one was even better. As we sell out our Saturday show every month, we decided with the additional interest generated from the comedy festival website that we’d be daft not to take a risk and put on 2 shows and we had an additional Friday show as well. Friday shows have a reputation of being a bit more wild than Saturday’s and this one proved no different. We had one member of the audience who had a vocabulary of one 5 letter word that began with P and ended with a y and he repeated this constantly throughout the night…it was funny at first. Saturday’s audience were that good we think they were grown in a lab. They laughed, they cheered, they danced and more importantly, they didn’t shout “P**SY” every 10 minutes.

Friday Highlight
Highlight of the Friday show was when Colin got Maria Crawford on stage and performed a mind-reading set on her. She’s a girl I went to school with so I knew she wasn’t a stooge and that Colin had never met her before. Maria’s in the police (something Colin successfully guessed) so she’s normally used to being the one interrogating. Her reaction was priceless when Colin got everything bang on.

Saturday Highlight
Jellybean Martinez got a salesman up on stage for the dance section of his show. The gentleman started off quite reserved but after a few minutes he was grabbing the microphone and trying to get as much stage time as possible. Once he gave himself the nickname Sam.i.am he transformed from middle-aged salesman to international dance sensation.

“Best night out in Glasgow bar none” Annie McQuiston 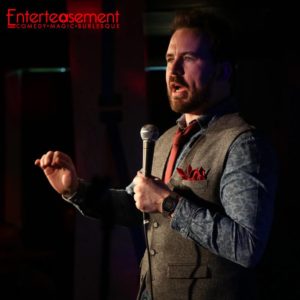 What a great compere! Chris is booked more these days as the headliner; however, there’s few better in the game than Mr Henry at compereing.

His interaction with the audience, building energy levels and injecting a sense of fun into the room are just marvelous. Not only that he controlled the rowdy audience with ease and kept us perfectly on time.

After telling stories about his upbringing in the east end of Glasgow he quickly moved into the audience to find out where they were all from which brought about some unfortunate surprises. 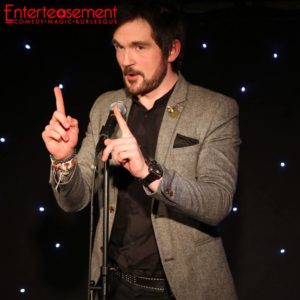 Colin packs more mind-reading demonstrations into 20 minutes than most people would in an hour show.  Miracles such as guessing peoples birthdays, occupations, and even what the person had for lunch where done with ease.However his big finish was simply out of this world.

We’ve had Colin at Enterteasement several times. His first show for us was very strong but over the last 3 years Colin has went from an excellent performer to a World Class Entertainer. We had lots of people come up to us after the show to say “He’s as good as Derren Brown” and we have to agree. Sadly Colin will be leaving us shortly to make a TV show in America, we wish him all the best and hope to have him back one day. 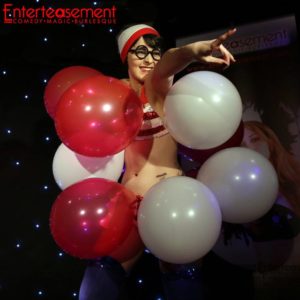 The body piercer by day / burlesque performing star by night was excellent as always. Lou performed 2 different acts for us on both nights.

The first was a new act with lots of energy and great music choice (one that has been stuck in my head since) One of Lou’s greatest strengths is that she looks innocent but as her routine develops she reveals an unexpected tattooed body with intricate artwork.

Her  second act is one of Enterteasment’s favourites! It fitted in perfectly with our Comedy theme. Like a good joke, her Where’s Wally act had an enjoyable story and a brilliant punchline that had the audience in stitches. After the show she left us a video of thanks to all the people at Enterteasement and to say how much she loved begin part of the show  – which we all loved. 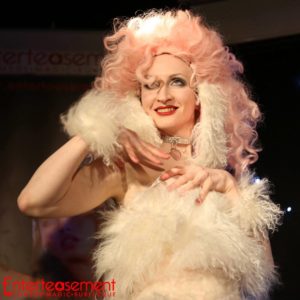 Vendetta was the first elite burlesque performer we ever hired and since then has always had a special place in our hearts. Yet again she didn’t fail to entertain.

Her first act was a very classic fan dance, slow, sensual and was performed with amazing stage presence.

Her second act, Poodle Parlor, is potentially my favourite burlesque act of all time. It’s got a story, humour and a few twists & turns…it’s just brilliant and our audience loved it just as much as I do.  Thankfully this act never made it to crufts because her high standards could have put her in danger. 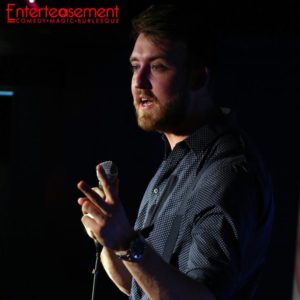 Craig is one of the nicest guys in comedy, always cheery, always happy and he loves performing comedy. He’s been to Enterteasement before as a guest and loved the show and has always wanted to perform for us. Although still relatively new to comedy his friendly style seemed to fit in perfectly with the other comedians.

On the Friday night after his day job in B&Q Craig was looking a little tired and a little nervous. He took to the stage and gave a solid performance. Saturday night, a rejuvenated Craig turned up, full of energy and confidence. Took to the stage and had the audience in the palm of his hands. A really strong performance from one of the best new acts in Scottish comedy. 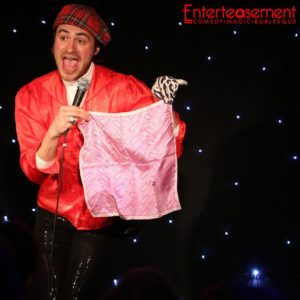 Our legendary Spanish pop sensation took to the stage on Friday night and spent a lot of time dealing with our resident P word heckler. He ended with one of his signature songs “Sausage wet”. The audience all enjoyed it and the reviews were positive; but, having seen Jellybean several times we knew he was capable of more. On Saturday night, we were proved right but we had no idea how much more he was capable of! Wow! 20 minutes of laughter and applause, The audience were all singing along and he finished his set with a section of the audience giving him a standing ovation and several of the comments said, “Was that Robin Williams” That’s probably the biggest compliment in comedy

Friday night we were 4 tickets away from being a sell out and Saturday we over sold the venue. The comment cards have been very positive and informative.  There have been a few constructive critisisms about the music choice during the breaks and the volume of music. We’ll look into this for next month. If you have any tracks you’d like to hear feel free to email them over.

Running this show I get a lot of credit, however, after booking the acts and doing the advertising the show is in the hands of the other people who are genuinely some of the most talented and hard working people I’ve ever met.

The staff have been great at setting out the venue and have invested in some benches and tables to accommodate our large groups.

The Staff
Genuinely don’t know what I’d do without these guys (and gals) They’re all amazingly good at what they do and not only do they work hard and do it with a smile on their face they somehow manage to put up with me.

The Glasgow Comedy Festival
These guys work hard to push shows and we sold around 30 tickets through them. These people would probably never have heard of us before and we’re hoping some of them will come back and with a bit of luck we’ll have some new regulars.

The Regulars
Without you guys, we wouldn’t be here today so thanks for the continued support. One day if we get to 100 regulars, we’ll put on a free show just for you guys (Considering we’re at about 25 at the moment that’s not a total pipe dream) .