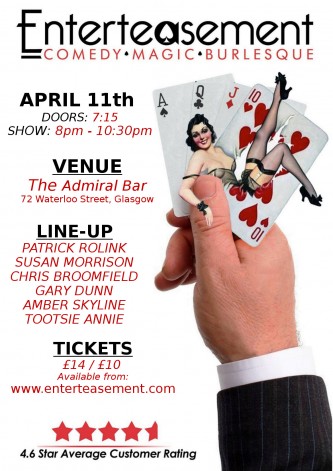 Our last 5 shows have sold out and we’ve been described as “The Best Night Out In Glasgow”.

Not only do we put on great shows with ‘As Seen On TV’ Comedians, International Burlesque Acts and Award Winning Magicians, we also pride ourselves on creating a warm, friendly and relaxed environment so our guests can enjoy the whole experience.

Does that sound good to you? Well come along and join in the fun. We only have 120 tickets and we sell out fast so don’t miss out.

The Big Man of Scottish Comedy. Mixed old-school jokes with modern storytelling. One of the most in demand Comedians on the UK tour and one of the few to perform at the illustrious Carnagie Hall

One of the most highly rated comperes in Scotland. Susan is a comedy volcano, erupting with an endless flow of scorching hot gags.

Chris is a fun, flity Welsh comedian based in Glasgow.  When he’s not making audiences laugh he’s running the longest running comedy club in Glasgow and helping developing the new talent – One of the good guys!

All the way from Newcastle, Gary has been a professional magician for over 10 years and has been an Enterteasement favourite since his first appearance. One of the best comedy magicians in the country.

TOOTSIE ANNIE
Tootsie Annie:  Finalist in Miss Pin Up Scotland 2015, Tootsie burst onto the Scottish Burlesque scene last year and has established herself as one of the must see acts of 2015. Glad to have her back.

Amber is a tribal fusion dancer from London. She’s been performing her unique belly dancing style at Sell-out cabaret shows all over the UK and was a big hit at her Enterteasement debut.

The Admiral Bar: Recently voted one of the top 5 comedy venues in Glasgow.  5 minutes from Central Station.