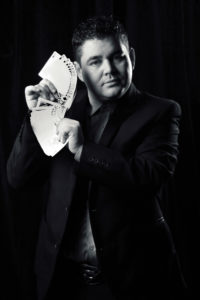 Chris Dinwoodie aka Woody the magician will be presenting his latest magic show ‘On The Ropes’.  Already established as one of the UK’s finest rope magicians, Woody noticed no-one had ever done a full magic show based on rope magic – most magicians don’t use any ropes in their act because they’re it can take 2 years to master one rope routine…and most of the tricks out there with rope are mind-numbing.

On March 24th, Chris will attempt to be the first magician in the World to perform a full show based on ropes (please bear in mind that phrase based on – some tricks won’t actually involve rope…it’s complicated)

Challenge one will be to create the hour of magic, challenge 2 will be to make it entertaining.  Chris is taking both challenges head on and looks to put on his greatest Glasgow Comedy Festival Show to date.