Enterteasement has been and gone and what a night.  Even if I do say so myself that was one of the best shows we’ve ever put on.  The atmosphere was electric,  every act nailed it and we couldn’t buy a better audience! If you were one of our audience and would like to leave some annonymous feedback please take our quick 10 question survey Click here to take survey 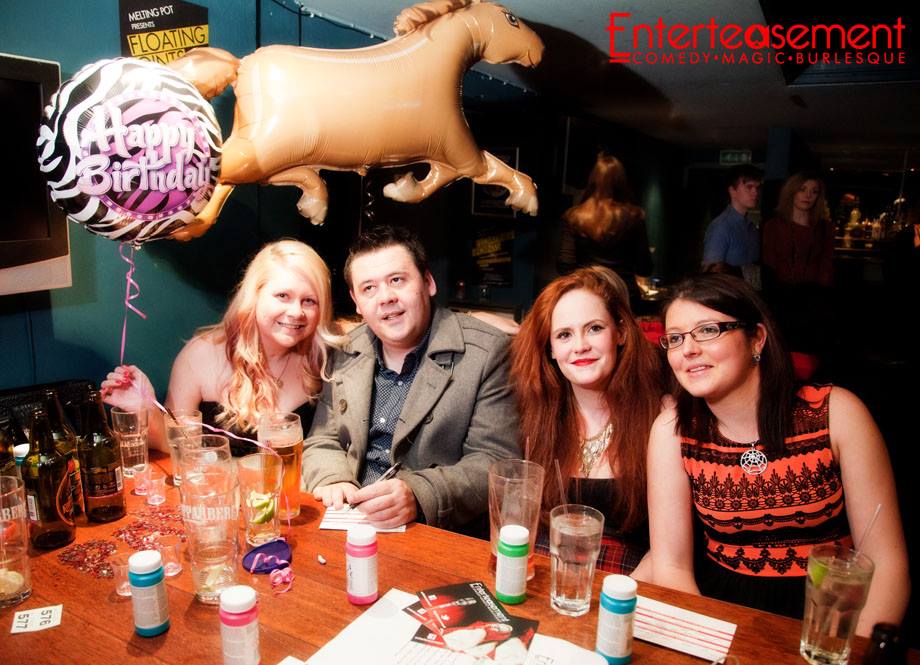 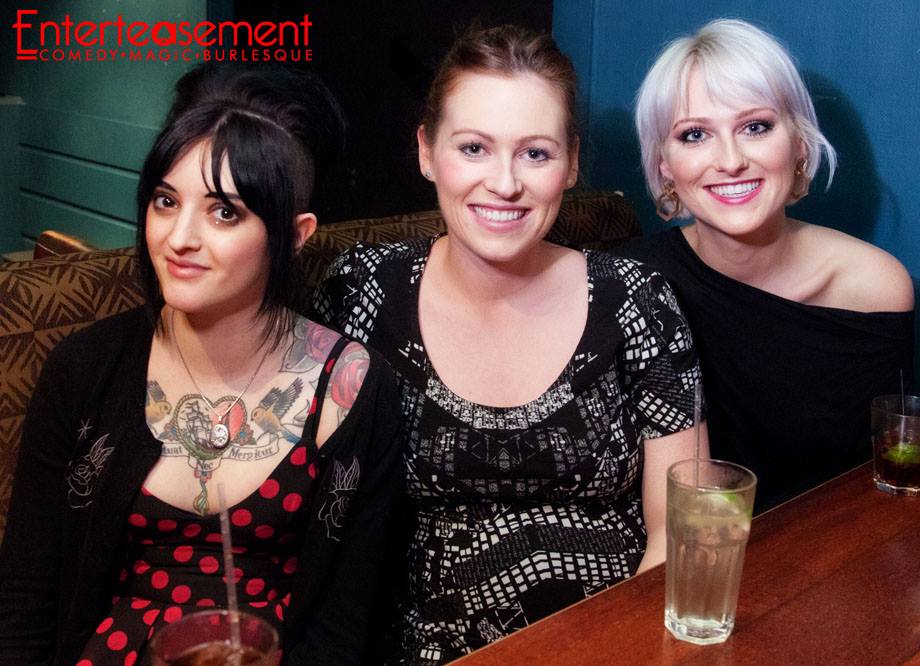 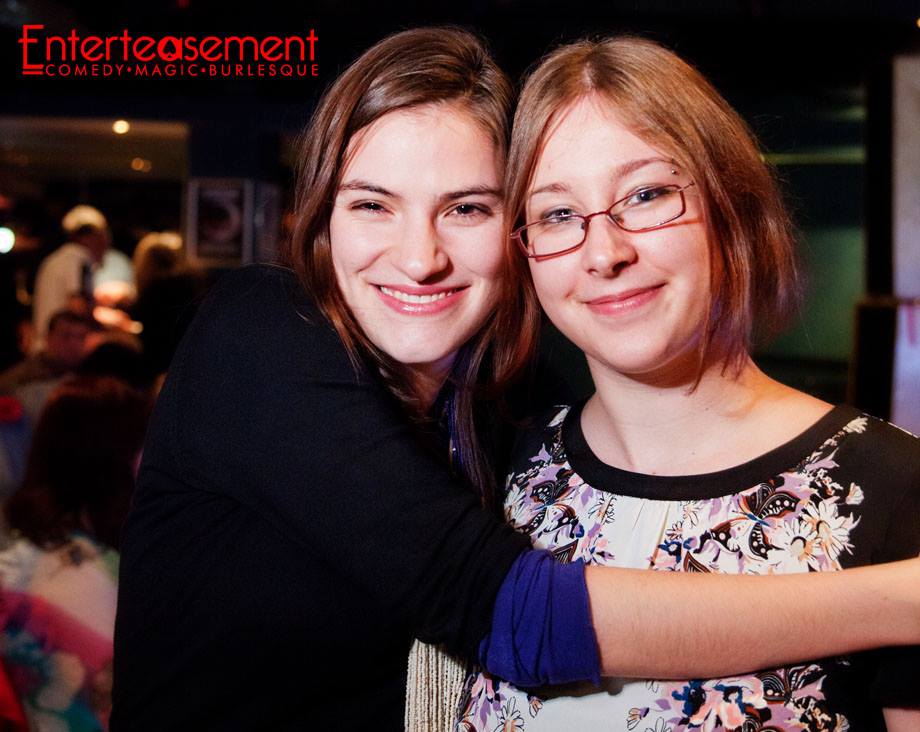 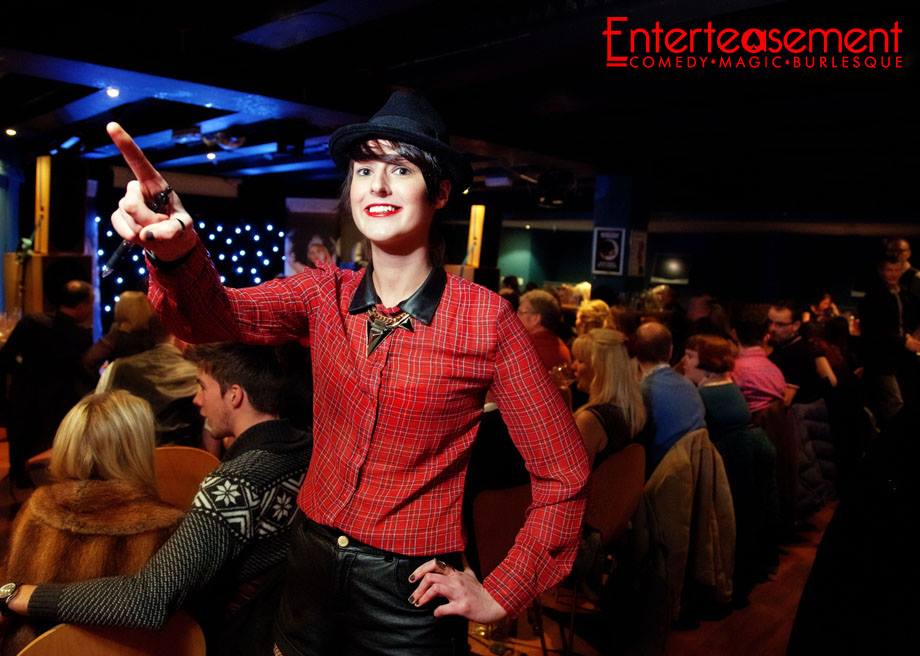 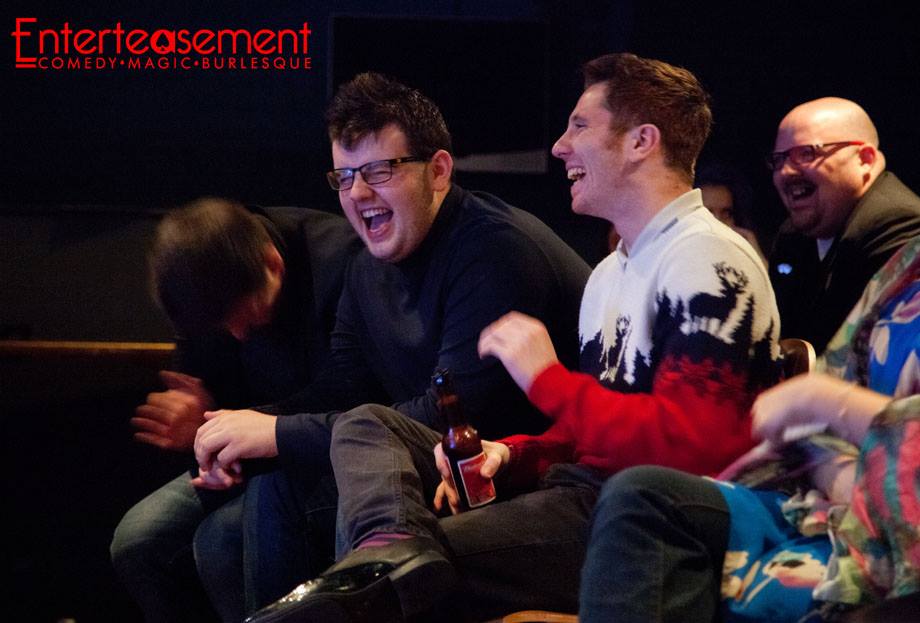 Sukki Singapora was leaving the venue and two of our audience members chased her down the street for an autograph!  (yes boys and girls…she is that good!)

Joe from the front row described the night as “The best night of his life“.  He’s trying to book the whole front row for next month!

Two of our regulars take it in turns to buy tickets and they never spoke to each other as they both turned up having purchased two tickets each (four instead of two!) and had that lovely moment of, “didn’t you get them last month, no I thought this month was my turn”

Our raffle contained an adult version of the classic Rubber Duck known as ‘Duck With A D**K‘.  At the start of the night everyone thought that was too rude and a bit tacky, at the interval people purchased the tickets for the other prizes and at the end when the tickets were drawn…everyone wanted the duck and the first thing chosen was old Ducky himself.  Everyone in the audience was secretly disappointed! 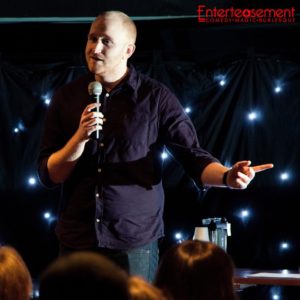 Lots of people think that the MC for the evening will interact with the audience and attack them by making fun of them etc.  Ray’s at the totally other end of the spectrum.  He talked to our rather rowdy audience as if they were pensioners on a Sunday afternoon;  nice, relaxed and very friendly.

He shared stories about his recent charity adventures in his ‘Challenge Ray’.  My favourite had to be an interesting encounter involving tattoos, cage fighting and naughtiness.  Not only did he make everyone laugh throughout the show but he kept everything on time as well. 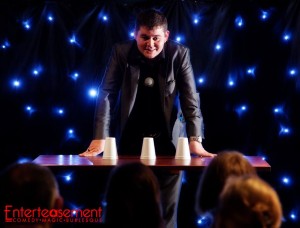 Disclaimer:  Woody the magician is also the reviewer of the show so this may be a little biased.

It’s challenging to change from Enterteasement organiser into Cheeky Chappie Magician.  I think this was apparent when I got on stage and found 2 spare chairs in the audience and tried to get some of the people standing to sit down.  I decided to do some of my tried and trusted routines using my ropes  and the cup and ball.  For the cup and ball I lucked out by getting an excellent spectator called Brian who made the routine come to life with Keith (the other spectator).

My Big finale was a trick with a spike where I get audience members up to move the spike about and I successfully managed to destroy all the cups except the one with the spike under it.  People love and hate this trick because it’s awesome but really scary as well.  Overall, I was happy with the performance. 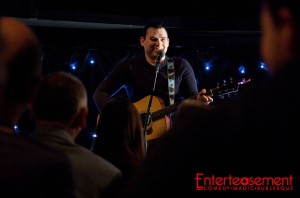 Making his debut performance for us and what a debut it was.   Comedy music acts are generally well received and can get by on the novelty value; however, Harry is a not only a very talented musician / singer…he’s also very funny.   The expression “He had the audience in the palm of his hands” is overused these days; but, Harry had everyone holding onto his every word.  Every time he finished a song there was a fear that it might be his last. Then as he started another one everyone got excited again then laughed, screamed and clapped.  He could have gone on for another 30 minutes and the audience would have been with him every minute of the way.  A great talent, very likeable funny and we can’t wait to bring him back in 2014. 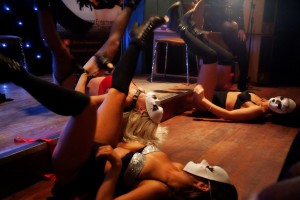 This is Scarlet Fever’s fouth appearance for us and they never let us down.   Really interesting choreography, excellent music choices, costumes – the full shabang.  They are a neo-burlesque or new burlesque themed act.  They use modern music ; chairs and masks as props instead of the more classic fans and feathers.  Their second act for us was especially powerful as they performed with very eerie white masks and appeared from the audience.  They built lovely suspense and no one really knew where it was going and then boom! Tainted Love came on the atmosphere in the room was electric!

Where do we start with this girl, She’s not on a different level, she’s on her own level.  She’s one of those few people in the world that’s as beautiful on the inside as she is on the outside and trust me – she’s absolutely stunning.  Spoke to one of the Superfans and he said, he caught her eye when she walked in and his heart skipped a beat.  She performed 2 acts for us.  The first was a fan dance which worked beautifully as it mixed the Asian fans with classic Jazz track, the second act was more upbeat which was great because our audience were suitably warmed up by now and received applause whoops and cheers throughout.  Both acts were great, well thought out and totally original not only a true world class performer but a joy to work with! 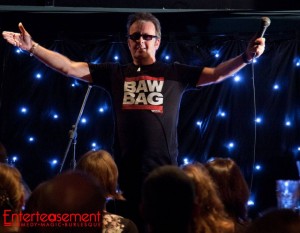 Stu is one of the most respected comedians in Scotland and is one of the reasons we actually have a Scottish Comedy Scene.  Years ago when there was no such things a comedy clubs / comedy night.   Stu and guys like Fred McCauley were doing gigs in pubs and setting the rules for how comedy nights should run.  He’s been performing comedy for over 20 years, been on TV, performed in front of thousands and  every time he gets on stage he gives it heart, soul & passion.  It’s incredible to think a man in his early sixties heavily medicated to fight off a baw bag of a cold performed with more intensity than many a healthy twenty year old could dream of.   25 minutes later he even threw out  a song and left the stage with a thunderous applause.

What’s more I awoke on Sunday morning to find Stu had described us as 10/10 and the finest gig in the city at the moment.  Wow!  Friggin Wow!!! That makes all the hard work worthwhile and inspires us to keep improving.

We met Mini Me!! Yes, Enterteasement were invited up to meet the man himself, we even fist pumped his little hands.  To round off the night in perfect style there was only 1 thing left to do…Get Sukki Singapora a fish supper and a can of diet Irn-Bru. 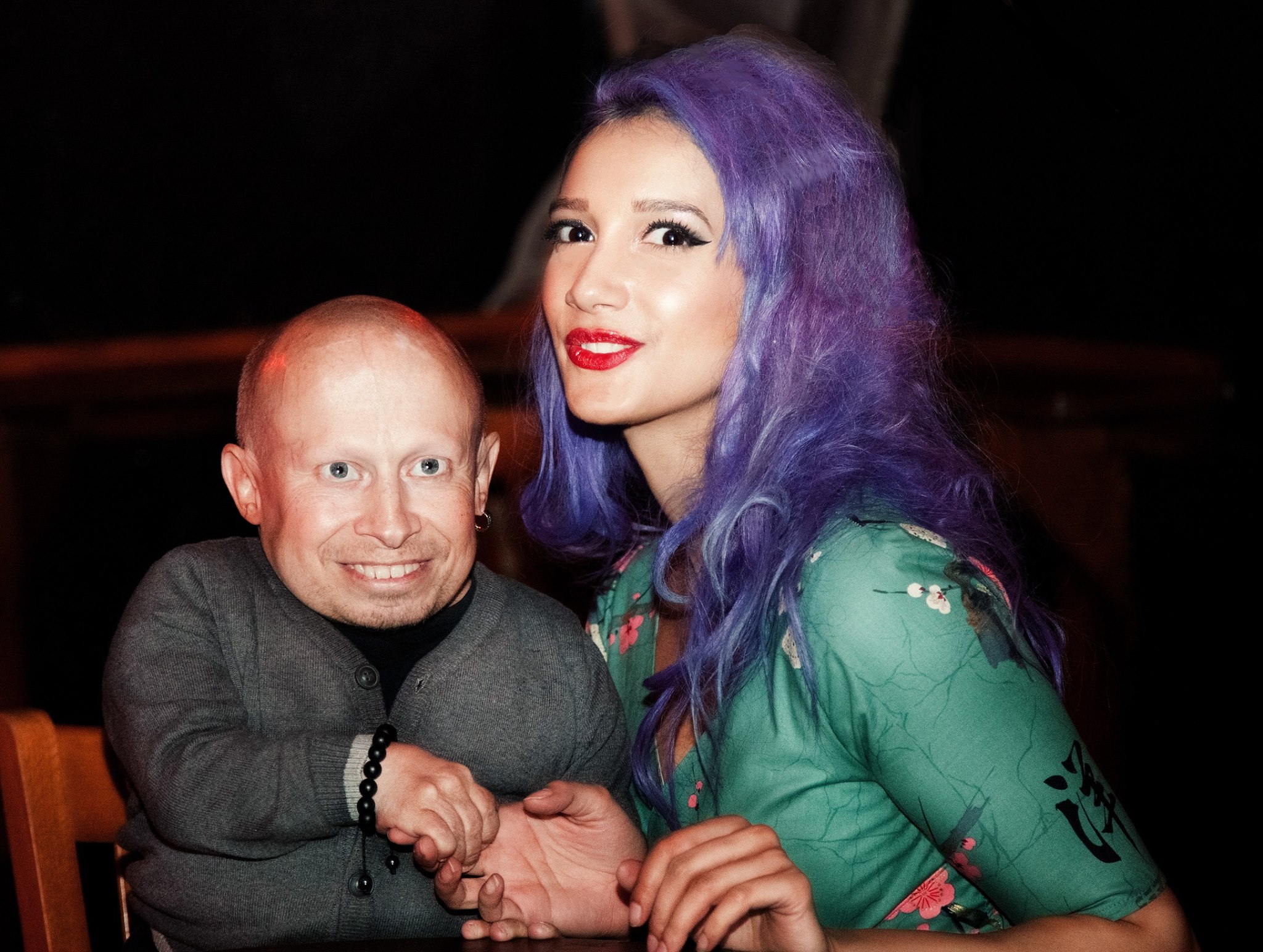 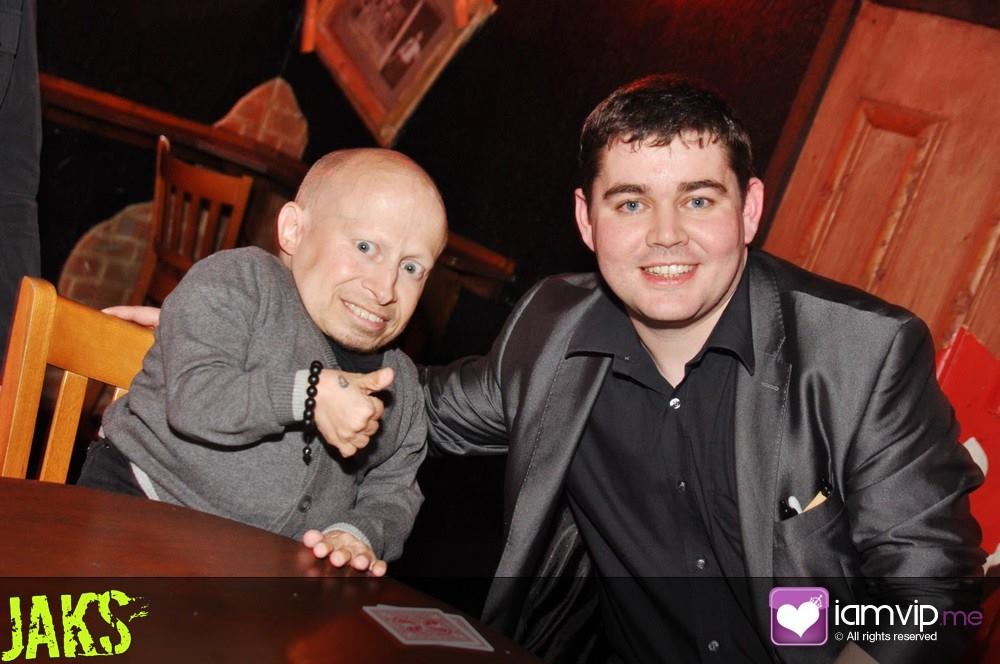 Thanks to everyone involved.  Pamela our superfan for having another birthday with us and being perfectly well behaved.  We bought her a cake and candles and we friggin forgot to bring it out – doh! However, the balloon horse made up for it slightly (Pamela loves horses!) .

The front row were excellent, really good crowd on Saturday.  We even had the self policers!  i.e. normally when our audience chat during the acts we have to ‘remind them to be quiet’.  However, the audience never gave us a chance because on the rare few moments there was chat they immediately turned around and gave a “Shhhh!”

Star: the manager
Jamie: the assistant
Iain: the sound guy
Samantha: the lady of the door
Stuart the photographer: http://www.stuartcrawfordphoto.com/