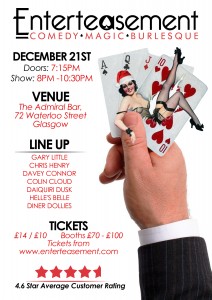 Enterteasement presents a Christmas special of Comedy, Mind-reading & Burlesque! Enterteasement is a premier night of the very best performers in Scotland. Don’t believe us? Try two Britain’s Got Talent Performers, 5 star reviews at the Edinburgh Fringe from three of our performers and our Headline act had not one but four SELL OUT SHOWS at last year’s Glasgow Comedy Festival! (That’s unheard of!)

LINE-UP
GARY LITTLE (HEADLINE)
Gary is one of the most highly rated comedians in the UK. His Initial show at The Glasgow Comedy Festival sold out so quickly three extra dates had to be added! How did he do it? No Advertising campaign (he doesn’t even have a website) he’s just got brilliant patter and an amazing joke telling ability. The man is on fire right now.

DAIQUIRI DUSK
4 Yeses from Britain’s Got Talent and a Standing Ovation From Amanda Holden. Since Then Daiquiri has become an International Burlesque Sensation recently becoming a Finalist at the prestigious Milan Burlesque Awards & has just returned from The World Burlesque Games.

DINER DOLLIES
When Daiquiri and Hell’s Belle combine their talents it wasn’t “2 heads are better than 1“; but, ” 4 boobies are better than 2″ This is one of the greatest acts we’ve ever had at Enterteasement, fun, naughty, playful, original and a total crowd pleaser. Previous Enterteasement ‘Best Act Winner’ and everything burlesque should be.

CHRIS HENRY (MC)
Scottish Comedian Of The Year Finalist and has received 5 star reviews of his debut Edinburgh & Glasgow Comedy Festival shows. Chris; style is his real strength, he’s the boy that never grew up; very friendly, playful, quick witted and to top it all off he has lovely blue eyes.