BOOM! Now that’s what I call as show! Due to a bad case of procrastination the tickets went on sale 10 days before the show…and we still sold out 48 hours in advance!!

I normally set the venue up with help of photographer Wullie;  however, as both weren’t available it was time for Star to take charge and set the room up and with the help of new assistant Jamie and they did a great job.  This show also had more regulars at it than any other show so it was nice to see so many familiar faces.  The 3 real standouts of the night from an organisers point of view were firstly; Stuart Crawford skidding on his knees like a school boy at a wedding to make sure he got the perfect photograph of Miss Helle’s Belle.  I was standing next to the area and when it happened there was that feeling of “That guy likes his job”

The second was a comment from one of our guests.  He approached me and said;

“Do you know, we were at the last  show a couple of months ago and absolutely loved it.  We were planning on going through to Edinburgh and had purchased tickets to go and see another show (I won’t say which show but it’s a big one!)  then we saw this show was on again and we were gutted that we would be missing it…so we just decided to give the other tickets away, buy tickets and come here”

And the 3rd would have to be Anna’s light up shows…yes she had stars in her shoes and they lit up during her full show which made me very happy because I like that sort of thing.

How did we do?

If you were at the show, please take 2 minutes to complete our quick anonymous survey.
Click here to take survey

Anna Devitt was our compere this evening.  It was her 3rd time performing for us and she has, as we say in the comedy world, knocked it out the park on her previous 2 shows.  However, she has been down 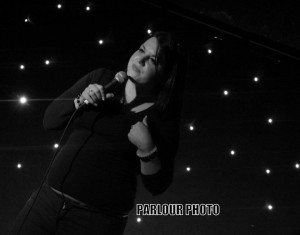 in London working on some top secret projects and hasn’t compere’d a show for 6 weeks.  When she was up in Glasgow, she would be compering 3 – 5 shows a week.  So she took to stage in her own words, “A little nervous and rusty”.  Although the room was a little busy there was certainly a fear of talking to her but one front rower, Anton, broke that trend and that was the show started.   The importance of a compere at a show is often under rated.  It’s a compere’s job to get everybody in the right frame of mind for a good night, get them relaxed and happy.  If the compere fails then it’s a big struggle for the rest of the acts.  This is why at Enterteaement we love Anna.  She’s very natural and talks to the audience and bounces off them and by laughing at herself with a mixture of self deprecating humour, stories of failed relationships combined with a fun flirty style and old fashioned Glasgow pub humour.  Anna’s a fans favourite and one of the Enterteasement all time greats.  (Now hurry up and get back to Glasgow so we can book you again!!) 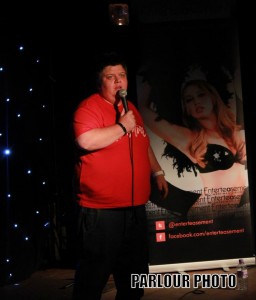 Susie McCabe.  Susie came to the stage and within seconds had the audience in the palm of her hand.  Who says female comedians aren’t funny?  Well it’s something that we hear lots of after our shows.  People are often approaching us and saying, “Now I don’t normally like female comedians…but she was brilliant” For some reason the ones who make it on TV are normally sh*te.  Susan, on the other hand, has bags of talent and doesn’t do the normal woman stuff. She’s as original in material as she is in style.  Very authentic with tales of her life as a lesbian coming from a catholic family – all very funny, intelligent and non offensive.     Susan is one of only a handful of comedians in the last 2 years to come through from an absolute beginner to be picked up by The Stand, ourselves and many other of the top clubs.  Last year, she was runner up in Scottish Comedian Of The Year and she’s in the final this year and is one of the favourites.  Best of Luck. 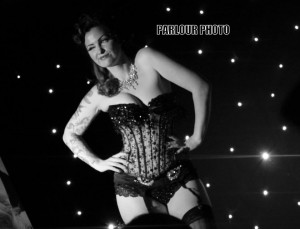 Amy Comes from USA and she’s performed around the world – It shows!  I’d describe her performance as captivating as you just couldn’t take your eyes off her.  Sometimes you can see dancers counting steps, but Amy just seemed to gaze into the audience and her act just oozed sensuality.  If you look at the wink in the picture this really sums up Amy for me as she’s very cheeky and vibrant and plays with the audience through her performance.   She performed 2 acts for us and both were fantastic

After speaking to one of our regulars he said, “That girl’s got the best boobs in the business” and I have to agree they were quite magical!

Uneasy Alliance are a combination of Magician Simon South and Burlesque Dancer/Magic Assistant/Magician Fleur Du Mal.  These guys are based down England but are visiting for The Edinburgh Festival for several shows.

Anna Introduced Uneasy Alliance as ‘A Burlesque Act’ because there was a wee bit of a mix-up in communication. When they came onto the stage there was certainly a few dodgy looks from the audience.  However, after they started their act all became clear and the audience figured out this was the magic act. 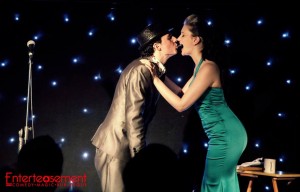 Simon Started by doing the old ‘Jonny Up The Nose, Out The Throat’ trick he ran around the audience and everyone let out shrieks of disgust.  (After that a card trick was performed but to be honest I was sill trying to find my stomach as the Jonny trick had turned me slightly nostalgic.  When I was younger I loved everything to do with magic and my cousin’s friend showed me this trick.  I’d have been about 7 and he would have been about 16 – that is kinda mad when you think about it).  Then it was Fleur’s turn to perform and she swallowed a large object…it was a balloon.  This is a great effect and has lots of sexual connotations.  After which we had the big finish of Simon putting not one nail into his head…but 2.  There’s only 1 thing worse then watching a nail being hammered into someone’s head…and that’s it being pulled out.  The second nail was removed with Fleur’s mouth.

Is it the type of show you enjoy?  I don’t know myself.  It’s a strange experience.  However, when Anna Came back on stage a spectator asked if she could pull the nail out and Simon let her hammer one in and pull it out again.  Mad! 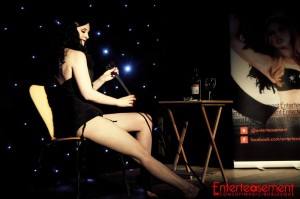 Miss Helle’s Bell is one of the few burlesque acts around today.  Most of the acts you see are actually modern burlesque or neo-burlesque as it’s known but Miss Helle’s Belle is classic, vintage, traditional burlesque act.  She runs her own 1920’s night in Glasgow and is very much of that era.  The trouble with classic burlesque is that if it’s not performed to a knowledgeable burlesque crowd it can be quite slow & boring and lose the audience’s attention.    However, Miss Hell’s Belle is masterful at doing classic burlesque and kept the audiences attention  for the whole act.  For any of you ladies out there wanting to study seduction, watch this act and the way a glass of wine is poured – very powerful yet playful and stunning as always.  A great act and a pleasure to work with. 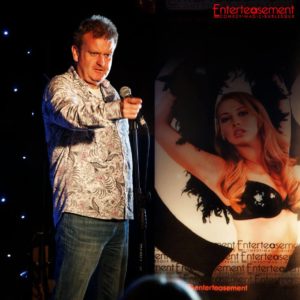 Raymond – The legend of the Scottish Comedy world.   Most comedians have a 25 minute headline set and when they’ve got that sorted they’ll use that for 5 – 10 years and go and tour with it.  Raymond on the other hand could do a 7 night tour and not repeat a joke.  This was the first time I’ve even heard him talk about sex.  A wonderful set including a phone call from a friend during a session which was just magical.   If you look over on the facebook album of photos you’ll see some of the faces and actions he was performing.  Raymond actually looked surprised when some of his jokes were getting laughs at one point which is can only mean he’s been perfoming in Edinburgh recently 😉

20 Minutes of Laughter from Start to Finish and I couldn’t have asked for a better end to the show.  Raymond looked truely delighted when he came off stage as he can now relax without the monthly email from me asking him to perform for us.

And you the audience

Pauline: who celebrated her Hen Night with us.  Yes people can actually turn up for a Hen night and behave themselves.
Gillian: who was simply referred to as T**S The whole night and seemed to quite enjoy it.
Lynn: the mad wee lesbian who flashed the audience when she won a prize
George Price: – official superfan who’ll miss next month. First show he’ll miss in about a year.
Nicola:  Who is a past performer who returned as a guest (this makes us feel special)
Carrie:  Who sent me a lovely email afterwards about how much she loved the show

We believe Enterteasement is special but it wouldn’t be anything without the advice of everyone involved.  So Please take a minute to help up by filling in the survey, joining us on facebook, joining the mailing list for the best deals and just spread the word.  We’re back on September 14th and tickets will be on sale very soon.  We hope to see you all again.